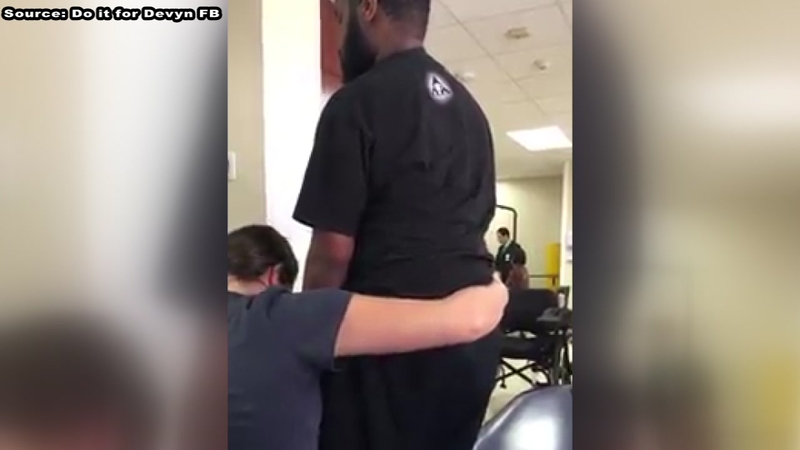 HOUSTON, Texas (KTRK) -- The man who was shot in the head during a Facebook Live stream continues making progress!

A video posted this month to the Do it for Devyn Facebook page shows 27-year-old Devyn Holmes as he practices standing up.

Devyn's recent accomplishment is one of many since being released from the hospital earlier this year.

A representative from the Do It For Devyn Facebook says he hopes to walk before the anniversary of the incident. Holmes is currently going through physical therapy in Galveston.

Cassandra Damper is charged with aggravated assault causing serious bodily injury and tampering with evidence. Her next court date is set for Jan. 31.

Anyone who would like to donate to assist with medical bills can mail donations to P.O. Box 16258, Galveston, TX 77552.

Report a correction or typo
Related topics:
houstonshootingfacebook livecaught on camera
Copyright © 2021 KTRK-TV. All Rights Reserved.
TOP STORIES
Boston-bound jet crashes on takeoff west of Houston with 21 on board
Houston executive 1 of 21 on board jet when it crashed in field
Crews working to put out gas line fire in Friendswood
Alvin Community College offers way to tap into oil and gas
Jan. 6 panel votes to hold Steve Bannon in contempt
Big warm up ahead but another cool front in the forecast
Astros to start less-than-healthy Greinke in Game 4 to salvage ALCS
Show More
Unsolved: A Life Never Lived
Alvin Community College gives inmates way to earn a second chance
471 criminals arrested and over $421K seized in 10-week operation
4-year-old survives fall off 70-foot cliff while hiking with parents
Wanted: 80,000 truck drivers to help fix the supply chain
More TOP STORIES News