'I felt like a failure': Father Turns to Ted for help getting son's headstone placed 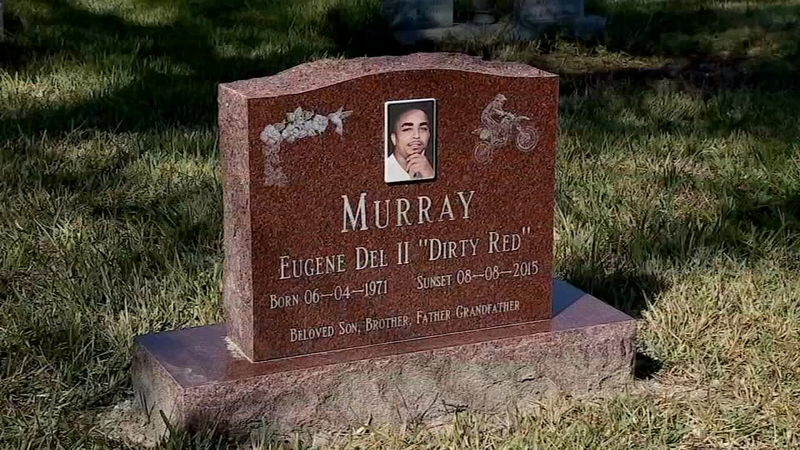 HITCHCOCK, Texas (KTRK) -- Eugene Murray buried his son, Eugene Del Murray II, in 2015 but needed some time to get his son's headstone.

"It wasn't easy, but I went online and to try to find something that would be appropriate for him 'cause his name, nickname, was Dirty Red. (I) finally found his stone."

After Murray paid for the stone, ordered it and made sure it was delivered to the cemetery in late 2018, he figured it would be placed on his son's grave. Months later, he says he found the red granite stone still in a crate outside the cemetery office in Hitchcock, Texas. That's when Murray Turned to Ted.

"I was getting so frustrated," Murray told Ted Oberg, "Every time I go down there and his stone was still in the dirt. That's my son with my name, my first born."

Murray says his phone calls and in-person visits to the cemetery didn't get any results. He worried he was running out of time.

"Almost a whole year went by and it's still there. I contacted Channel 13, Mr. Ted, to see if he could help me solve this problem," Murray said.

We too had a tough time getting an answer initially. At first, the cemetery manager told ABC13 he was moving the stone as a courtesy and Murray had not paid for the placement. Murray disputed that.

The Turn to Ted team eventually told the cemetery manager we wanted to come down and see what was going on. Days later, the stone was moving.

"That's when he went off and did the right thing and they erected it," Murray said.

Today, the stone is over Eugene Jr.'s grave. As he recounted his most recent visit to the cemetery to see it, Murray called it, "(a) relief. I'm getting up in age and I, you know, it's bad enough my son passed on before me and not to see his headstone in place, you know, made me feel like a failure."

The cemetery owner at Hitchcock's Mainland Memorial Cemetery said he was moving the headstone as a favor so it wasn't top priority. The cemetery did complete the work after we reached out to ask about it.

Have a tip for Ted Oberg? A problem to solve? Get in touch with us on our tip page, or send a tip below. (On mobile? You can open our form by tapping here.)
Related topics:
societyhitchcockturn to tedcemetery
Copyright © 2021 KTRK-TV. All Rights Reserved.
TURN TO TED
Houston Astros on pace for record beer year
Daughter Turns to Ted after mom's washer repairs stalled for months
Woman Turns to Ted for refund help after winter storm canceled trip
Mail service restored after 5 months when couple Turns to Ted
TOP STORIES
Astros tie World Series with 7-2 win over Atlanta in Game 2
Windstorm could bring gusts up to 50 mph Thursday
Brothers describe boy's beating death in their family home
'That's not a mother': Grandmother of accused mother's daughter reacts
3rd person accuses same man of road rage, says he spat in her face
Eyewitness describes deadly Buffalo Speedway shooting
Police investigating after person found shot at San Jacinto College
Show More
The Woodlands voters consider incorporation in Nov. election
US limits immigration arrests at schools, 'protected' areas
Tree damages home and SUV during storm in N. Harris County
Is it a chicken? Astros and Braves fans struggle to identify mascots
Facts about 'Bobby Dynamite,' the Astros train guy, you may not know
More TOP STORIES News