KTRK
HOUSTON, Texas (KTRK) -- The Moon landing on July 20, 1969 was no small feat, and celebrating it shouldn't be either.

On that day, astronaut Neil Armstrong stepped down from Apollo 11's lunar module and became the first human in history to step onto the moon's surface.

Armstrong said the famous words "that's one small step for (a) man, one giant leap for mankind."

Now as NASA works to plan another manned mission to the Moon, here are eight ways you can fete the anniversary of the first iconic moment.

If you had lunch with an astronaut at The Post Oak Hotel, the natural next step, or should we say leap, is to party like one.

It all kicks off at 9:15 a.m. and leads up to an outdoor concert and festival featuring WALK THE MOON and American Idol alum Phillip Phillips.

So what's there to do from morning until night? What isn't there to do might be the better question.

You'll also want to give yourself extra time for parking. Find out how to park for free here.

Space Center Houston will culminate its Apollo Moon Landing activities with a Splashdown Party from 6 p.m. to 10 p.m. on July 24.

During the '60s-themed event, hear sounds from THE FAB 5, a Beatles tribute band based in Houston.

Entry is included with general admission.

You'll want to raise your glass as you sip the Tranquility Base Margarita at Xochi, owned by Chef Hugo Ortega. According to Visit Houston, the margarita was created by famed Sommelier and Mixologist Sean Beck.

You may also want to try the restaurant's "Roca Lunar," or "moon rock" in Spanish, which is a chocolate mousse with chocolate soil and caramel-coffee foam.

Along with stopping by Xochi for drinks, you can also sit down for an Apollo 11 Moon Landing Dinner on July 18.

Chef Ortega is offering more Apollo-inspired cocktails at two of his other restaurants.

At Backstreet Cafe, try the We Came In Peace For All Mankind cocktail, and at Caracol, make a toast with the Michael Collins Remembered drink.

Collins was the third member of the Apollo 11 crew made up of Armstrong and Buzz Aldrin.

Crave Cupcakes is celebrating with a giveaway.

Head to the shop's Instagram page and tell Crave who you love to the Moon and back.

Tag the person (or people, because there's plenty of love to go around!) in the comments for a chance to win a half dozen cupcakes featuring handcrafted man on the moon toppers.

If you head out to the Astros game on July 22, snap photos with a replica statue of Neil Armstrong's 1969 spacesuit from the mission. Find the statue in center field at the Budweiser Brew House.

Plus, you can interact with the NASA Mobile Exhibit and Space Exploration Vehicle on the Plaza.

Be in your seats for the ceremonial first pitch. It'll be thrown out by Rick Armstrong, the son of Neil Armstrong.

On the field, the Astros will commemorate the anniversary with special hats.

Apollo 11 launched at this moment (9:32am Eastern) 50 years ago today. The Astros will honor the anniversary of the first moon landing on Monday, 7/22 by wearing these on-field hats. https://t.co/M7g5yJuUnA

But what's an Apollo 11 celebration without our favorite alien mascot? You can buy an Orbit "Moon Landing" bobblehead for $35. You must have a valid game ticket.

Relive the mission to the Moon in photos at the Museum of Fine Arts, Houston

Mark the Moon landing anniversary with a trip to see the exhibit "Shooting the Moon: Photographs from the Museum's Collection 50 years after Apollo 11."

See images ranging from documentary photographs to a recreation of Buzz Aldrin's first footprint on the Moon.

Hey, big spenders, you can book the Space Center Houston Package at The Post Oak Hotel at Uptown Houston.

The package includes a round-trip helicopter ride over the Houston skyline to and from Ellington Field, an exclusive behind-the-scenes tour of the Johnson Space Center, and lunch with an astronaut.

By the way, a Grounding Ritual Spa Treatment is set to bring you back down to Earth.

NASA's Mission Control from Apollo has been restored to look the way it did 50 years ago.

The control room at Johnson Space Center was last used for space shuttle flights in the 1990s.

Now you can step back in time, right down to the retro coffee cups. The 1969 Mission Control has also been recreated down to the carpeting, wallpaper and glass ashtrays.

Moon landing celebration in a galaxy far, far away at the Children's Museum of Houston

May the force be with you as the celebration of the Moon landing and Star Wars unite for an intergalactic good time.

Kylo Ren, Rey, Leia, Chewbacca and members of the 501 Legion are set to stop by for a meet-and-greet.

Plus, earn Jedi status with your own lightsaber.

Wrap up your space adventure by watching actual footage of the CBS TV broadcast of the Apollo Mission. 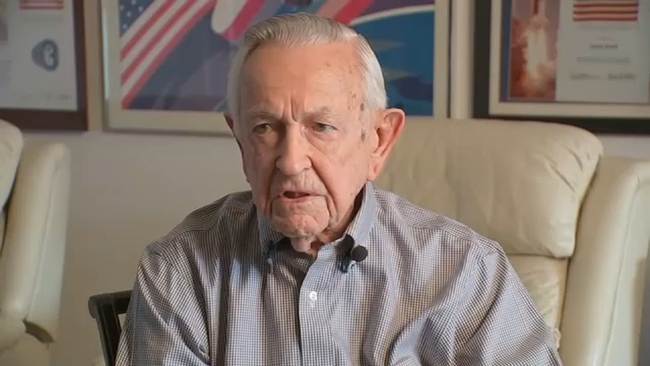