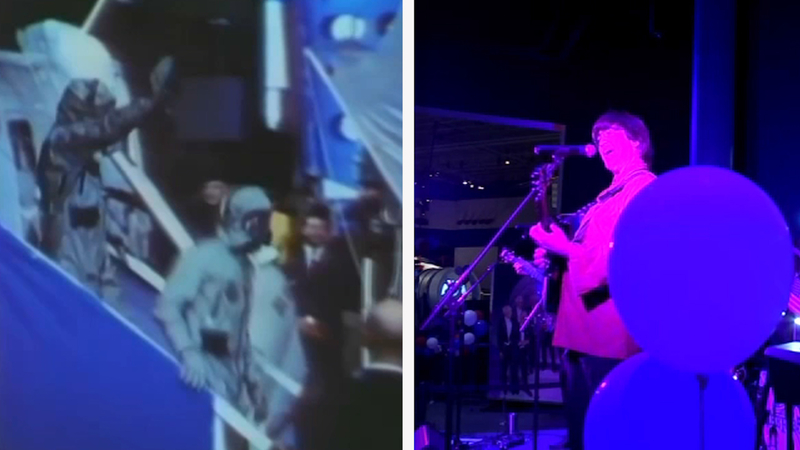 HOUSTON, Texas (KTRK) -- On Wednesday, Space Center Houston concluded the 50th anniversary of Apollo 11 by throwing a party bringing people back to the 1960's.

From the music to the clothing, you might have thought you traveled back five decades. It was all part of the museum's splashdown party.

The reason for all the flower power was to celebrate the historic achievement of Apollo 11 safely returning to the Pacific Ocean.

SPLAHDOWN PARTY: @SpaceCenterHou is taking us back 50 years tonight. The museum is hosting a splashdown party on the anniversary of the Apollo 11 splashdown. Can’t get here, don’t worry, we’ll show you what it was like on @abc13houston at 10pm. pic.twitter.com/CwapyVhH5A

When it happened, NASA employees threw a splashdown party, a celebration re-enacted at Space Center Houston.

"The music really takes me back," Steve Thompson said. "My hair is quite a bit shorter than it was back then."

For Thompson, attending the party wasn't only about reliving memories, but remembering how the historic Apollo 11 mission changed minds.

"I thought, well the Moon's not made of cheese," Thompson recalled. "It's awesome!"

Doesn’t this bring back memories? A Beatles tribute band is playing at @SpaceCenterHou as the museum celebrates the 50th anniversary of Apollo 11’s splashdown back to earth. Watch the story tonight on @abc13houston at 10pm. pic.twitter.com/14mvIFt1YC

The Beatles music may have set the mood to the 1960's, but it also served as a stark reminder. It's been almost 50 years since a real moon splashdown party took place.

"The feeling inside that knowing we're not stuck on Earth forever is a wonderful feeling," Christine Schmelebeck recalled.

A feeling the Schmelebecks hope their children get to experience thanks to the new NASA Moon project, Artemis.

It's a goal that should update the splashdown party music.

"Maybe someone would bring some Nirvana with them," Hillary Bas said.

An updated playlist the whole world is waiting on.