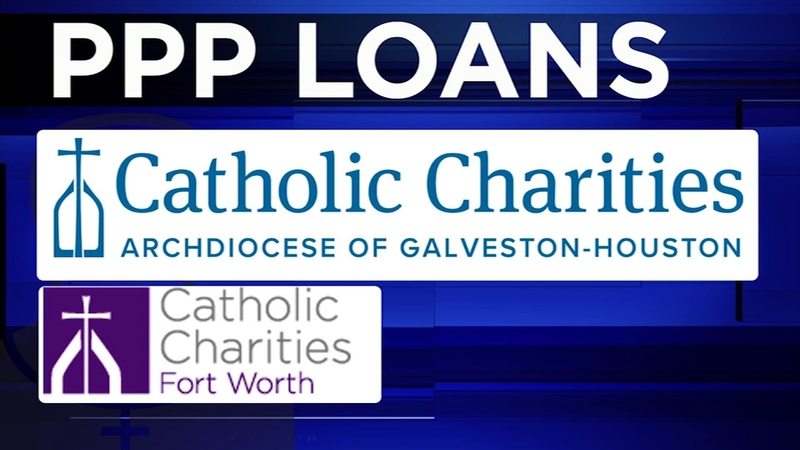 Thousands of churches got loans from the SBA

HOUSTON, Texas (KTRK) -- Hours after SNAP (Survivors Network of those Abused by Priests) criticized the Catholic church for accepting PPP loans Thursday, 13 Investigates looked into the program finding tens of thousands of churches accepting cash in the job saving program.

Our team also found the feds changed their own rules to do so.

Thursday SNAP members gathered outside the archdiocese to express their anger over how much of that money was given to the Catholic church. The group is upset that taxpayer dollars meant for coronavirus relief is being given to dioceses that have battled sexual abuse claims and allegations of cover-ups.

Survivors Network of those Abused by Priests (SNAP) is upset that churches got PPP loans.

Eduardo Lopez de Casas told reporters, "the church is requesting and being granted federal dollars. We are all putting money into the collection baskets of the Catholic church whether we like it or not."

ABC13 reached out to the archdiocese but never received a response.

When our team dug into the program in Texas we found at least 174 Catholic non-profits received loans estimated to save 8,583 jobs according to the church affiliated groups. The loans to those Catholic organizations are worth at least $46 million. It could be far more as the loans are only reported in ranges and 13 Investigates calculated the $46 million using the lowest possible amount.

The largest in our search were to Catholic charities in Houston and in Fort Worth. Each received at least $2 million.

Schools and other church affiliated groups are on the list. It's not just churches themselves.

Newsweek reports 88,411 churches received $7.3 billion in PPP loans - not just Catholic churches but denominations of all kinds.
To be eligible, the federal government's Small Business Administration had to overlook some existing rules, according to the SBA - they "decline(d) to enforce" existing rules barring some religious entities from getting SBA Loans.

That was way back in April at the start of the program. An FAQ article published on the SBA website tells non-profits, "Because those regulations bar the participation of a class of potential recipients based solely on their religious status, SBA will decline to enforce these subsections and will propose amendments to conform those regulations to the Constitution. Although 13 C.F.R. 120.110(a) states that non-profit entities are ineligible for SBA business loans (which includes the PPP program), the CARES Act explicitly makes non-profit entities eligible for the PPP program and it does so without regard to whether nonprofit entities provide secular social services."

Under the PPP Program, churches that received the money did not have to limit speech or activities at all. Neither did other non-profits, for example Planned Parenthood, which also received PPP loans.