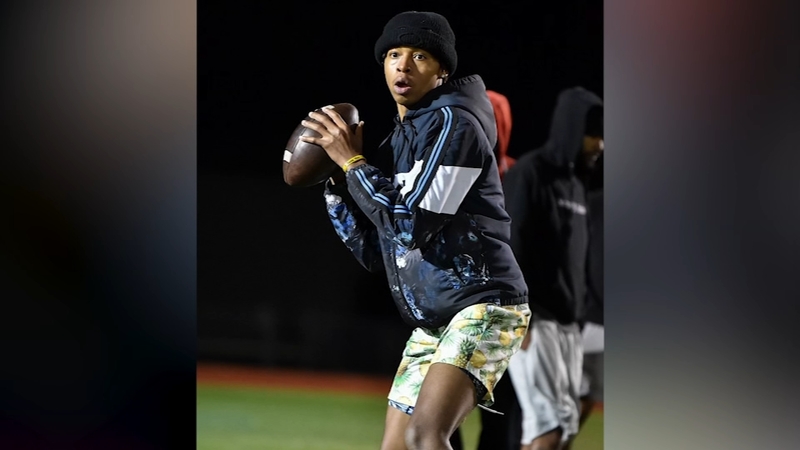 HARRIS COUNTY, Texas (KTRK) -- A 16-year-old who was shot to death Thursday night in north Harris County was a high school quarterback whose team made it to the Area playoffs this past season.

The victim, identified as Mikell Potts, was shot around 8 p.m. after he approached a small four-door car that was stopped in the road in the 600 block of Kiley Drive, according to the Harris County Sheriff's Office.

The car took off at a high rate of speed after the shooting, deputies said. Investigators were still looking for the shooter Friday, as well as a motive behind the killing.

Awful news from early this morning:

Praying for his family, friends & the Spring Dekaney community. pic.twitter.com/vh3Wmp2rfq

"An eager & fun-loving young man, I remember him telling me how proud he was for his friends & how excited he was for his chance," journalist Collin Kennedy tweeted Friday. "Praying for his family, friends & the Spring Dekaney community."

Potts was a junior at Spring's Dekaney High School and appeared in at least five games during the 2020 season, according to MaxPreps.

"Mikell was a dedicated member of our Dekaney High School community, bringing enthusiasm and optimism to any task before him," Spring ISD Communications Officer Sylvia Wood said in a statement. "This year, he was a remote learner but returned to school for athletics, in which he served as the back-up varsity quarterback for the Wildcats. He loved football, his friends and his family, and we are devastated by his passing."

Wood said counselors would be on hand next week at the high school to support staff and students as they mourned Potts' death.


To our community members near the Remington Ranch area, near North Fwy & Rankin: @HCSOTexas units responded to an in-progress call at the 600 blk of Kiley Drive. Units determined a male suffered a gunshot wound and was confirmed deceased at the scene. pic.twitter.com/46JARud8Ui