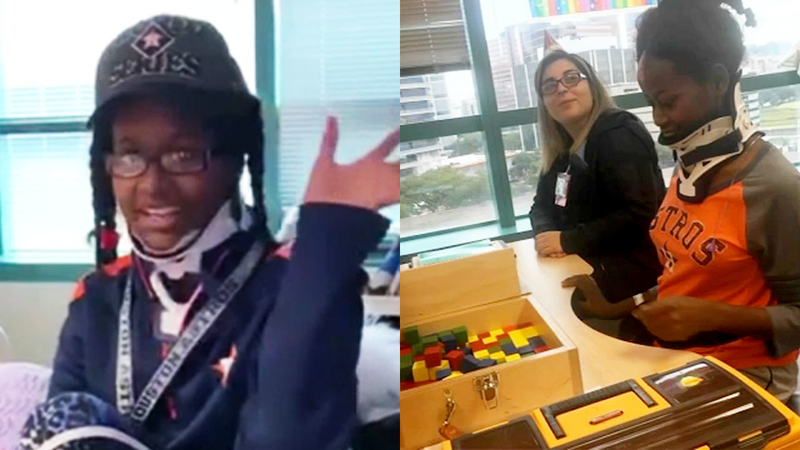 HOUSTON, Texas (KTRK) -- It's incredible that 13-year-old London Banks is sitting up and speaking just a matter of weeks after a hit-and-run crash.

On Wednesday, London, who is an avowed Houston Astros fan, wanted to inspire her favorite team to a big win in Game 7 of the World Series.

From her hospital bed, she gave an update on her recovery in a video posted to social media.

She also gave her own personal message to her favorite team.

Finally, she let people know how much she appreciates the support over the last few weeks.

"Thank you so much! I love you all!" London said.

Back on Oct. 2, London and her brother were walking back from a convenience store when she was hit by a car in north Houston. The driver remains at large, according to investigators.

London has had some milestones, including breathing on her own and saying her first words since the crash: "Go 'Stros."

SEE ALSO: Young Astros fan breathing on her own week after driver hit her and ran

Her mother, Shandra Mosley-Banks, said London has been following her team while in rehab. The girl and her family have been the most boisterous bunch in the hospital during game time.

"She has watched all of the games. Like, this weekend, we really thought we were going to get put out of the hospital because we were so loud, especially during the grand slam (in Game 4). She lost it and I was like 'OK, you chill. Don't fall off of the bed,'" Mosley-Banks recalled.

Mosley-Banks has said London can understand what others are saying and is getting around with some help and a walker.