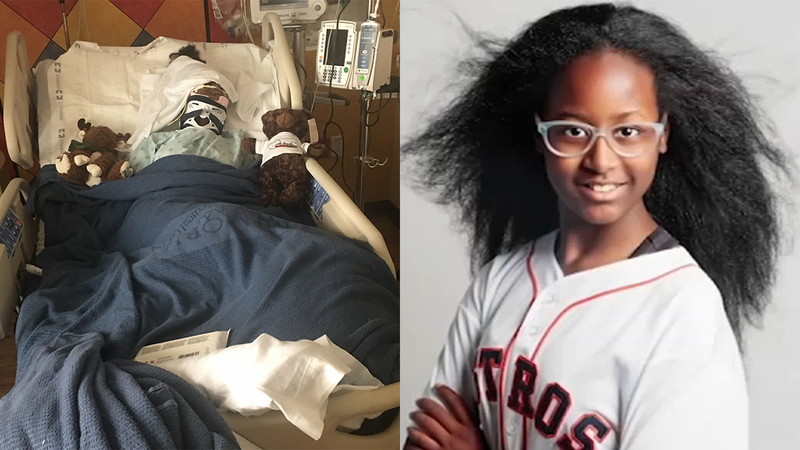 HOUSTON, Texas (KTRK) -- Hundreds of supporters are sharing their deepest sympathies on social media with the family of 13-year-old London Banks, who remains hospitalized after she was injured in a hit-and-run crash in north Houston.

Her mother, Shandra Mosley-Banks, says London and her brother were walking back from a convenience store when she was hit by a car on Wednesday, Oct 2. The driver remains at large, according to investigators.

"She will lay there sometimes and cry and when I talk to her, it calms her," Mosley-Banks said.

Please pray for London Banks — she remains in the hospital after a hit & run last week that left her with severe brain injuries. No 13 year old should have to go thru this! The driver has not been located. 💔🙏🏽 #TeamLondon pic.twitter.com/wfXDfy0B7I

London is still in a lot of pain, her mom says, and her body remains swollen from her injuries.

It's unclear if the teen will need any surgeries and is currently unable to speak or swallow on her own.

Her mother has been playing gospel music to soothe London and continues to talk her through the pain and update her on the Astros. London is a big fan of the team, her mom says. On Monday, London managed to speak to her mom.

"She rolled over to where she knew I was and I heard her say 'Mama,' and it was so magical," Mosley-Banks said. "I hopped up immediately and ran to her bedside."

Mosley-Banks is keeping people updated on her daughter's road to recovery using Facebook. She allows posts about London's condition to be shared publicly in hopes that the driver will come forward.


"We began rehab and London did amazing," wrote the mom in a recent post. "She began speech therapy. We have a long road to go, but we are well on our way."

Saturday, family and friends joined together to lift London up in prayer.

"It feels really great to know that we have the community behind us and supporting us," Mosley-Banks said. "It's beautiful."

Dennis Sigut was one of the people at the prayer rally. He met London once more than three years ago when she was on a field trip at a park in the Heights.

Mosley-Banks said she also prayed for the person who hurt her daughter. She said she received an update from detectives about the crash and said she feels hopeful about the progress in the case.