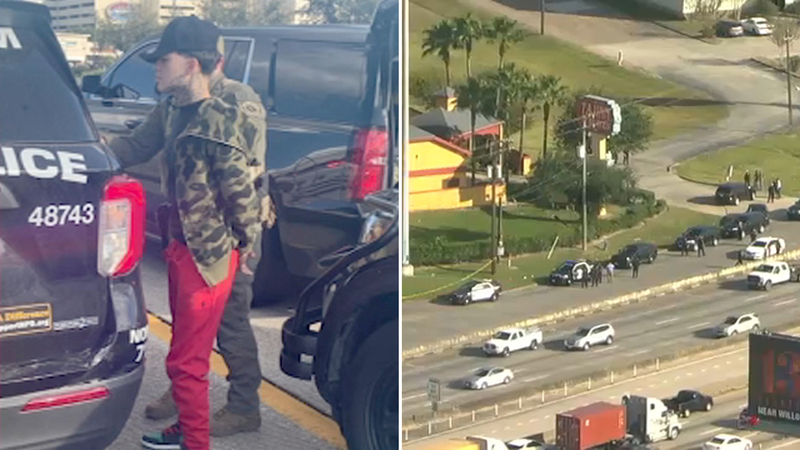 HOUSTON, Texas (KTRK) -- A family member of the 24-year-old accused of killing a Houston police sergeant told ABC13 the suspect isn't perfect, but is also no killer.

The relative, who spoke with Eyewitness News on Wednesday under condition of anonymity, said Robert Soliz is a family man who took care of his wife and hadn't been in trouble for years. Soliz is accused of killing Sgt. Sean Rios during what Chief Art Acevedo called a gun battle on Monday.

Acevedo told ABC13 on Tuesday they believe Soliz was shooting at another vehicle in north Houston well before the gun battle that killed Rios.

"That's part of what we believe happened here is that our sergeant witnessed something in the works - aggravated assault with a firearm - and intervened, and sadly, gave his life for the people of Houston," Acevedo said.

Soliz's relative, however, insisted the incident played out differently, claiming Rios gave no warning to the suspect

"(Rios) just walked straight out of the car. Straight to my brother's car. And my brother starts backing up and says, 'Hey, stop walking toward me with a gun.' Gave him a warning. Cop kept walking. My brother shot a warning shot. After that, they went to gunfire for over two minutes," the family member said.

The relative added, "(This is) no question, self-defense. Guy with no police. With no uniform, no badge, no nothing. It's 2020. You can't hop out a car with your gun showing and not expect for the other person to have a gun to not."

HPD confirmed earlier in the investigation that Rios was out of uniform at the time. The sergeant was on his way to his 2 p.m. shift at Bush Intercontinental Airport when he died, police added.

Soliz's prior criminal record showed charges dating back to 2014. In fact, Soliz had been out on a $100 bond connected to a February charge of unlawfully carrying a weapon in a motor vehicle.

Other charges against Soliz range from having marijuana on him to evading arrest and criminal trespass. In 2017, Soliz was accused of threatening his girlfriend at the time with murder.

Soliz appeared Wednesday afternoon in Harris County Probable Cause Court after HPD took him into custody on Tuesday, causing a momentary halt of traffic on Katy Freeway.

Soliz's attorney Paul Looney also held a news conference in the afternoon, calling on any law enforcement agency other than HPD to investigate the case.

Looney said HPD is the wrong agency to investigate and Chief Acevedo has a conflict of interest in the case. He also said HPD is assuming Rios had a valid police response to engage in a gun battle.

The attorney of a 24-year-old man accused of killing a Houston police sergeant is criticizing the department's early handling of the investigation. In the video, see the reason the attorney insisted HPD should be off this case.

Late Wednesday, Chief Acevedo offered a response on Looney's claims and calls for an outside investigation.

"The Houston Police Department is aware of the concerns raised by the defense attorney representing the suspect charged in the shooting death of Sergeant Sean Rios. Our department is committed to conducting a fair, thorough, and impartial investigation. Moreover, the Civil Rights Division of the Harris County District Attorney's Office is conducting a parallel, independent investigation," a statement by Acevedo read.