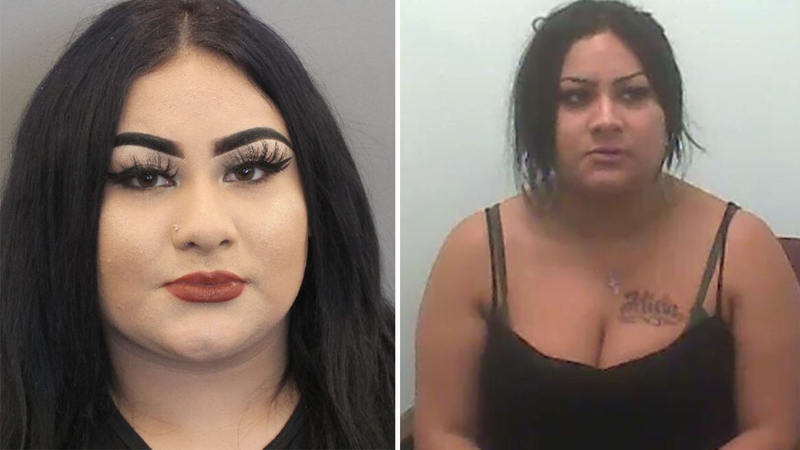 SPRING, Texas (KTRK) -- A $5,000 reward is being offered for information leading to the arrest of a woman accused of luring a man to be killed by MS-13 gang members.

Karla Jackelin Morales, 20, cut off her ankle monitor five days before she was set to stand trial in October 2021. Court records show the monitoring company was alerted at 9:07 p.m. on Oct. 20. Morales never answered the phone and never showed up for trial. Attempts to find her since have been unsuccessful.

"She helped plan and plot this vicious execution, and somebody out there knows where she is hiding," Harris County District Attorney Kim Ogg said. "You can do the right thing by helping deliver justice for (Jose Alfonso Villanueva's) family, and you can collect a reward for your efforts."

Authorities said 24-year-old Jose Alfonso Villanueva was lured out of his home in July 2018 by Morales who told Villanueva that she was going to give him marijuana for his birthday.

Villanueva got into a car with Morales and two MS-13 members and drove to a field that was about 500 feet from Lewis Elementary School in Spring.

At the field, a total of five gang members attacked Villanueva. Francisco Amadeo Flores-Salazar later told authorities that he slashed and hacked the 24-year-old at least twice with a machete causing him to try to crawl away. Other MS-13 members then gunned down Villanueva because he was allegedly connected to a rival gang.

Villanueva had been hiding from the gang members, who were searching for him for allegedly disparaging the gang in a rap-music battle, according to authorities.

Dr. Luis Salinas, a sociologist who studies MS-13, said that is exactly how the gang works and machetes are their weapons of choice.

"By dealing with a person in this way, it's sending a message to other people, 'If you disrespect us or cause us harm, in any way, this is how we're going to deal with you,'" Salinas said. "MS-13 is known for their machetes because they are so gruesome and so violent."

Flores-Salazar, 21, pleaded guilty on Oct. 18 in exchange for a 45-year sentence and four other gang members who slaughtered Villanueva have already been sentenced to prison. Morales is the last to face trial.

Morales goes by the nicknames "Cherry," "Karlita," "Missy," and "Foxy." She is 5 feet tall with a heavy build. She has black hair and brown eyes, as well as tattoos, including a large one on her upper left chest that reads "Alicia."

Morales was set for trial on Oct. 25. Prosecutors asked the court to set her bond at $250,000. The judge instead set it at $100,000. A district court judge later lowered the bond to $60,000 and waived the defendant's fees for an ankle monitor. She failed to show up for a hearing days before her trial was to begin and hasn't been seen since.

MS-13, or Mara Salvatrucha 13, is a transnational gang that originated in Los Angeles. The gang thrives in El Salvador and is known for extreme violence.