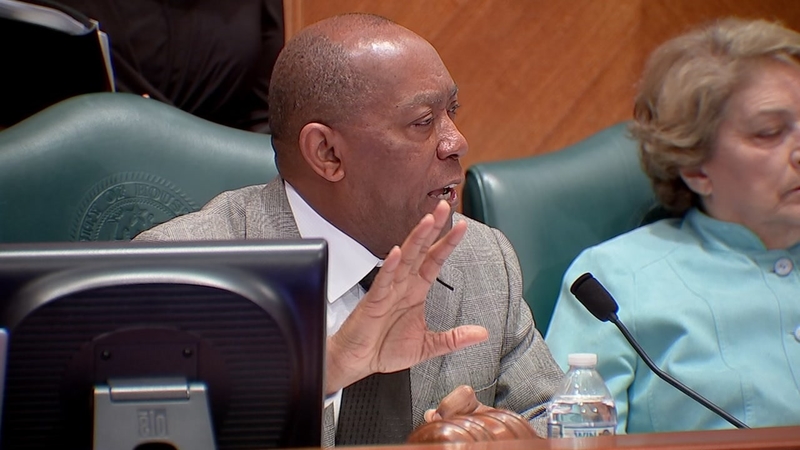 Boykins to Mayor Turner: "This is not a dictatorship"

HOUSTON, Texas (KTRK) -- Houston's city council meeting Wednesday was at times heated as the body heard, among other things, how it will contend with a $260 million budget shortfall for the next year.

Houston Mayor Sylvester Turner today initially said his administration already has a list of city employee layoffs to deal with the expected cost of Proposition B, the voter-approved measure mandating equal pay between firefighters and police officers. A short time after 13 Investigates requested the list under the Texas Public Information Act, Mayor Turner reversed course suggesting his administration is still coming up with the list. Turner would not say how long it is or if hundreds of firefighters are on it. He has previously suggested that many may be needed.

"If there are going to be any layoffs in question, I will tell you, we have identified who those layoffs will apply [sic]," Turner said during the meeting. "That list has been put together."

After the meeting, when questioned, Turner said there was no such list.

"Let me correct myself, as we finalize the process and the system and you put a cost on that, then you determine what we can afford, what we can't and how we then balance the budget."

RELATED: Fire union to Turner: It's past time to implement Prop B

It is the latest back and forth in the months-long process to implement the voter-approved measure. Today marks three months since Election Day when voters approved the measure.

Turner was tough to pin down on where negotiations stand. At one point Wednesday he said his administration has had meetings and conversations with the Firefighters Association about implementation. When pushed Turner clarified saying there have been no meetings, only "conversations" and admitted no proposals have been offered to the association representing firefighters.

The Houston Professional Firefighters Union tells us there have been no substantive conversations outside of the ongoing lawsuits between the union and city and none have been scheduled.

Turner claims there is a meeting scheduled, though when asked, he wouldn't give a date, only saying it would happen "soon."

Tomorrow night at 10, 13 Investigates takes you inside the HFD Academy where 23 cadets have been stuck in training since just after election day. Their training cost you hundreds of thousands and their deployment could save you money in overtime costs, but there's no movement. See what they've been doing since the mayor decided the trained lifesavers wouldn't be sworn in.

Houston city council members have also issued a 20-point memo to Turner, which points out ways to pay for the implementation of Proposition B.

The memo ranges from layoffs to privatizing garbage to EMS services.

The consultant's list offered nearly 60 cost-cutting measures. That report, which cost the city $565,000, has a number of suggestions that could streamline city operations Brown said.

The Prop B and finance discussion took up two-thirds of the meeting and became contentious at times between Turner and the council.

Several council members asked Turner for more inclusion in the budget process and more planning time to better understand where the city's money will go.

"I'm hoping we have the opportunity to look at specifics on particular items as we move through the spring so we're not just handed a budget on May the first and told 'We want you to pass this on May 15," council member Mike Laster said.

"Council member, it's the same timeline as the last three years," Turner said.

Council members weigh options to pay for Prop B

"We shouldn't have to be begging for financial information," council member Dwight Boykins, said. "Don't treat us like children."

Turner snapped back at some of the council members, who said he was disrespecting them. Once, Turner seemed upset because Boykins didn't call him "Mayor" Turner.

"Thank you," Turner said. "And you're really pushing it. So be careful."

"This is not a dictatorship," Boykins said.

The decisions will be made over the coming weeks and months as the city prepares itself for the next fiscal year, which starts in July. The projected budget deficit is $260 million dollars, including $100 million for the Prop B implementation.