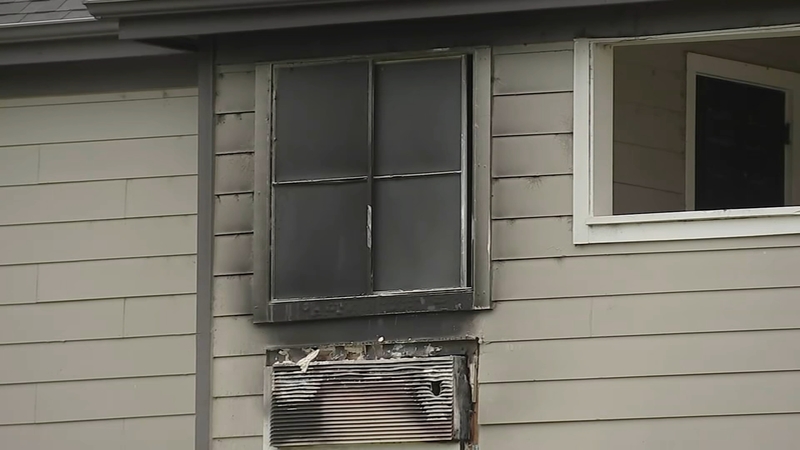 Student punches window, another jumps out as PVAMU fire ignites

Fire officials told ABC13 that it was an air conditioning fire that started in the hallway on the third floor. The fire was contained to the hallway, firefighters said.

At least three students were injured, officials said. Two were rescued from a ledge by firefighters and taken to the hospital for smoke inhalation, while a third student jumped out of the building from the third floor.

Firefighters said the student who jumped from the third floor suffered a leg injury.

A police officer who ran into the building to get students was also reportedly treated for smoke inhalation.

Possible fire at Prairie View A&M students standing outside with blankets. Waller County EMS, Fire and Sheriff are on scene. No details are confirmed at this point. pic.twitter.com/YVqlSka9tQ

"I see a girl hanging off the ledge, another one on the floor, another one's skin bleeding," a student told ABC13's Brhe Berry. "I reported my AC unit had been out for three weeks and it was hot in my room. They constantly did not want to go fix it and then finally when they fixed it, this happened. Like, what is going on?"

Before firefighters arrived at the scene, some students used mattresses to try and help the girls get down from the ledge, witnesses said.

The students who spoke to ABC13 said they didn't know how bad the damage was, but think the students in the impacted dorms lost everything.

All of the students who live in the dorm were being temporarily relocated, officials said.

Fire officials said one student suffered a leg injury after jumping from the third floor, while another was experiencing breathing problems.

The building is located near the library and other student dorms.

"Just before 6 a.m., campus emergency officials were made aware of an unknown structure fire in student housing. The building was evacuated, and all building residents were accounted for by the professional staff on the scene. Our Student Affairs team is working diligently to assist impacted students with relocation arrangements.

The cause of the fire is under investigation, and there are three reported injuries."