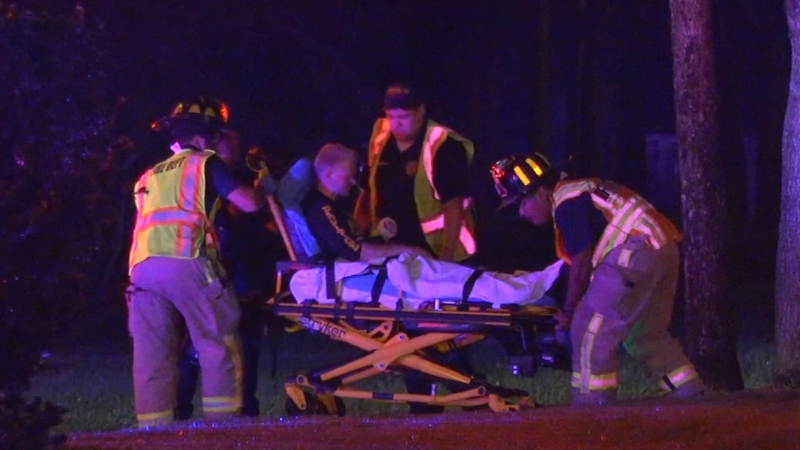 It happened near I-10 and Greenhouse Road around 3:20 a.m. Thursday.

Police say it all started when a group of undercover officers saw a group of men wrap a chain around an ATM in an attempt to steal it at the Members Choice Credit Union on North Fry Road.

Officers observed several males in several vehicles steal an ATM near Clay and Fry. Officers stopped several vehicles and one fled. One HPD unit had an accident and two officers had minor injuries. Multiple suspects in custody. At least two at large. 202 pic.twitter.com/VcWtLoLRhO

Police say the two officers began chasing a car carrying three of the suspects. The two officers lost control and crashed into a tree, according to police. Both officers were sent to the hospital with minor injuries and are expected to be okay.

Police say two of the three suspects managed to jump out of the car and run off. The third suspect tried to hide in the backseat.

"We saw him back there and took him into custody," said Lt. Larry Crowson with HPD.

Police say several different vehicles and a total of six suspects, who have all been arrested, were involved, Crowson said.

Two more suspects in custody for total of six.

RELATED: Clerk shoots at would-be ATM thieves who smashed truck into store with customers inside in SE Houston

The clerk opened fire on the men after he heard the pickup truck being rammed into the gas station, police say.