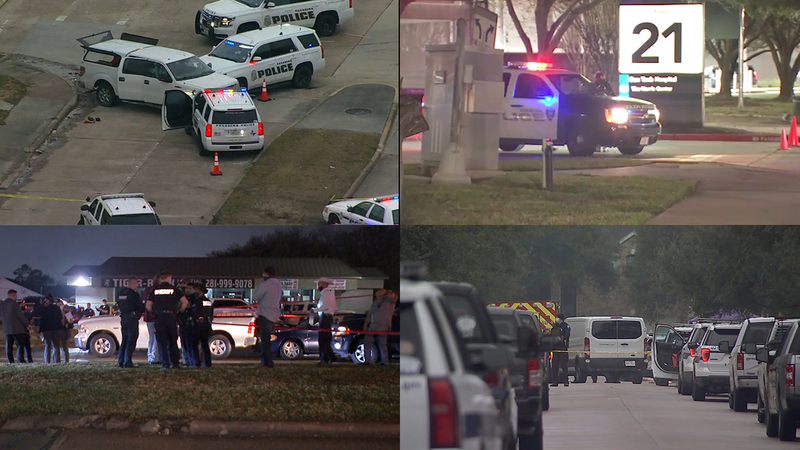 HOUSTON, Texas (KTRK) -- Another violent month across the region includes at least five shootings so far that involve police officers, according to a compilation of ABC13 coverage.

The shooting death of a a La Marque man by a police officer on Dec. 9 is still being investigated by authorities.
Joshua Feast died during a confrontation with police on Pirtle Street. The incident has generated added controversy after family members claim the 22-year-old was shot in the back.

A robbery suspect was shot to death by a Texas DPS trooper on Dec. 11 in northwest Houston, police said. Charles E. Jones, 36, was pronounced dead at the scene. The trooper was part of a joint investigation with the Harris County Sheriff's Office into robberies of Boost Mobile stores and saw the robbery take place in the 7300 block of Antoine Drive. After Jones took off from the store, law enforcement initiated a traffic stop, according to a statement from HPD. Jones drew a weapon and that's when the trooper shot him with a rifle, HPD said.

There were two officer-involved shootings on Monday, including an incident in the parking garage at Ben Taub Hospital involving an off-duty Houston police officer. A man armed with a knife charged at the officer who was working a second job as security at the hospital, according to Houston police. The incident began with the man wanting to check himself into the hospital because he was in psychological distress and was cutting himself while inside his truck. The HPD officer and a Texas DPS trooper found the man in the parking garage, where he ran toward the officer with a knife, according to HPD Chief Art Acevedo. The officer, a nine-year veteran of the department, fired at least two rounds. After the shooting, the man then tried to take the officer's personal truck and drive off, but couldn't get it in gear, HPD said. The man bit the officer as he was taken into custody.

In Pasadena, an armed man who's believed to have stolen two different vehicles in a crime spree was shot to death Monday afternoon by officers. According to authorities, 34-year-old Michael Anthony Dilbeck stole a Cadillac Escalade in southeast Houston. The OnStar assistant in the vehicle tracked it heading to Pasadena, where the SUV was shut off and officers responded.

Pasadena police came into contact with Dilbeck who then pointed a gun at himself. Police said Officers backed away.

Dilbeck then ditched the Cadillac and stole another vehicle, leading police on a chase back into Houston, where officers blocked him on Sabo in the city's southeast side. That's where Dilbeck drew his weapon and was shot to death by four Pasadena police officers who pursued him.

Pearland woman held against her will, suspect shot to death by officers

On Tuesday, Pearland police officers shot and killed an armed suspect Tuesday afternoon. It began with a call from a resident who told dispatchers she was being held against her will in her home by a neighbor, authorities said. The man leveled a gun at officers when he came out of the house and didn't follow orders to surrender, according to Pearland police. Officers shot the suspect who later died at the scene. The man was described as an elderly white male, who has not been identified. No one else was injured in the shooting, police said.

All five incidents remain under investigation.