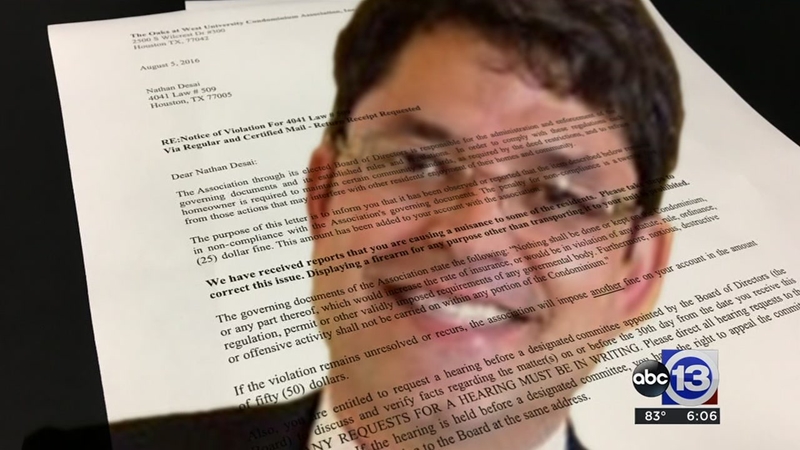 What we can and can't find out about Nathan DeSai

On August 4, roofers were working above his West University condo.

DeSai apparently believed someone was trying to break in -- and confronted the workers with a gun, according to the condo's property manager.

"It was a several-months long roofing project and we got a call from the roofer saying that one of the residents had come out waving an assault rifle at them," said Jason Delgado with Rise Association Management Group said in a phone interview. "We immediately called the police."

In the aftermath of DeSai's apparent shooting rampage which injured nine Monday, Houston's police chief did not seem aware.

"We cannot find a nexus to that individual or that apartment," Interim Chief Martha Montalvo said during a press conference after the shooting and after DeSai's was shot and killed by officers.

No charges were pressed, but in a letter to DeSai, property managers warned him threatening behavior would not be tolerated.

"We have received reports that you are causing a nuisance to some of the residents," the August 5 letter obtained by abc13 read. "Please take steps to correct this issue. Displaying a firearm for any purpose other than transporting it to your unit is prohibited."

It was just one of the erratic behaviors noted recently.

As officers were searching DeSai's car, a notebook emblazoned with a swastika was found in his bag. There was apparently more Nazi gear in his apartment.

"We did find some old nazi emblem and also some other paraphernalia where he lived," Houston police homicide detective Dwane Ready said.

Some who saw the notebook on abc13 said it may be a Hindu symbol, rather than a Nazi emblem

A former client who had been in his apartment said desai collected old weapons but never saw any Nazi material.

There were also reports of heavy pot use in DeSai's apartment.

"The information we would hear from other owners is that there was a marijuana odor that was pretty strong coming from his unit," Delgado said "We had numerous complaints about that."

In addition, court records show that DeSai's business was dropping off.

DeSai was a lawyer, but with few -- if any -- current clients.

That's in stark contrast to more robust years like 2008 when he was working 26 criminal and civil cases and 2009 when he had 17 such cases, records show.

DeSai did not pay his property taxes on time in 2014 and 2015 and was fined because of it. His property tax bill is now current, records show.

Everyone interviewed Monday seems flabbergasted by the news and many are looking for a motive.

Neighbor Deborah Boily described DeSai as "sweet and friendly" and is also mystified.