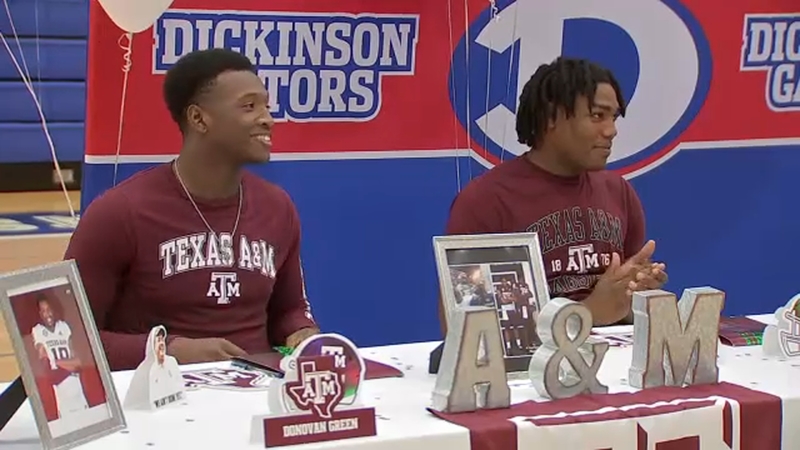 HOUSTON, Texas (KTRK) -- It's the most wonderful time of the year. Yes, it's the holidays, but this time we're talking about a moment where talented Houston-area athletes and their families see all that they've been working toward come together in National Early Signing Day.

Here are several of the names to watch.

Tight end Donovan Green and offensive lineman PJ Williams are among the standouts who signed with Texas A&M University.

According to ESPN, Donovan is ranked the No. 1 tight end in the nation.

PJ is also coming off a banner year, as a senior leading Dickinson to the second round of the state playoffs and being named as a 2022 Under Armour All-American.

Hear the incredible story of how Dickinson's Jayson Caldwell got his first offer. And now, he's headed to college!

This incoming Texas A&M freshman is in the spotlight! Here's what to know about PJ Williams.

Defensive lineman Kristopher Ross signed with the University of Texas at the Galena Park ISD Stadium.

His background includes helping North Shore secure a 14-1 record in 2020 and being named the Houston Touchdown Club's Defensive Player of the Year in 2021.

Kristopher Ross is officially a Longhorn. Ross ranks 172nd on the ESPN 300. 🤘🏾 pic.twitter.com/89mbwG35FA

The Aggies are adding quite a lot of star recruits to their team.

Noah Thomas, a four-star wide receiver, also signed with Texas A&M, and well, his numbers posted in the tweet below speak for themselves.

You'll want to keep tabs on these names, and one of them is staying in town. Can you say whose house?

All eyes were on Kam Dewberry, who is one of the most highly-coveted offensive line recruits in the nation. He stayed mum on where he would be headed, but on Wednesday he made his final decision and signed with Texas A&M.

We know we've talked quite a bit about Aggieland, but the Longhorns will also be adding some Houston-area talent to their squad.

Humble's Kelvin Banks Jr., a five-star offensive tackle, has committed to the University of Texas.

Another Longhorn is on the list! Running back Jaydon Blue is heading to the University of Texas and ranks 269th in the ESPN 300 recruiting ranking.

Like the other schools, Manvel's talent is also enormous.

I’m beyond blessed to receive an Offer from the University of Central Arkansas💜#ucabears #GODsPLAN pic.twitter.com/1JQ3o8cPZ1

Bobby was one of six Katy football players to participate in Early Signing Day.

The high school senior committed to being an Aggie on Feb. 24, 2021, his mother's birthday. His mom is Turkey Leg Hut owner Nakia Price.

It was a big year for Bobby, who thought he wouldn't be able to suit up with his teammates again after needing surgery for a hand injury at the beginning of the season.

He ended up wearing his Katy jersey one last time as the Tigers ended their season.

First off I want to say thank you to Coach Joesph and my teammates for the endless support the past 3 years. At the beginning of the season, I thought I’d never wear a Katy jersey again after getting surgery. Today my teammates gave me one more opportunity to do so. #1 out ❤️ pic.twitter.com/D8WtDxdIl5