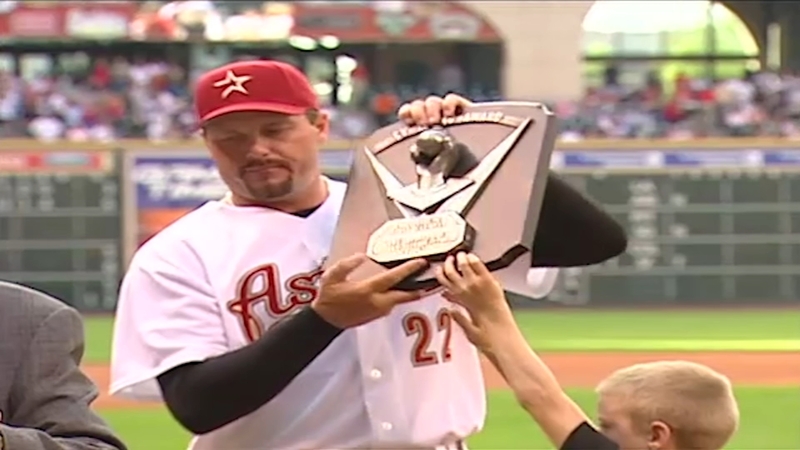 He attended Spring Woods High School, played at San Jacinto Junior College, and later for the Houston Astros. His foundation, launched in 1992, is headquartered in the Bayou City.

Coaches, friends, and family will accompany the Rocket for his enshrinement. However, another family member, his grandmother, may deserve credit for discovering his historical pitching arm.

"She caught me throwing her grapes," Clemens recalled during an interview at his Houston home. "She had a huge grapevine between her house and her shed - there was a 10-yard opening. I would whistle those grapes at cars that would go by, and she'd see me and bust my butt for it."

The fruits of Clemens' labor were on display for the rest of us throughout his dominant 24-year Major League Career. His seven Cy Young Awards, annually presented to the best pitcher in the league, are the most all-time.

He says his time from 2004 to 2006 with the Houston Astros transformed his hometown.

"We flipped this town from a football town to a baseball town," Clemens said. "It was rocking. My three years here - it was a packed house every night. I was pitching in front of 40, 45-thousand people. We had the Killer B's rolling."

Craig Biggio and Jeff Bagwell, two of those Killer B's, were inducted into the Houston Sports Hall of Fame in 2021. This week, it's Clemens' turn to be enshrined.

"This is home. So I think that's what makes it most special for me," Clemens said. "It's a great honor. I'm super excited to go in with Sheryl Swoopes and Clyde Drexler. There were some great 22s running around this wonderful city."