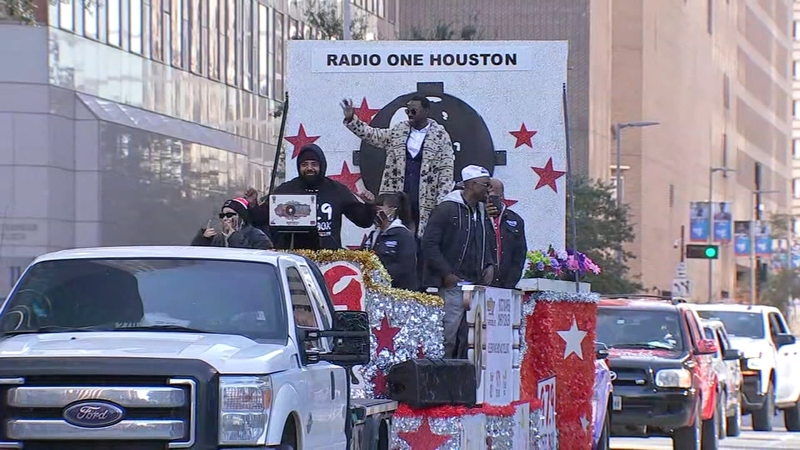 Houston honors Dr. King with 2 MLK parades, but why?

HOUSTON, Texas (KTRK) -- If you've been in Houston for a period of time on Martin Luther King Jr Day, you may have noticed there are two parades celebrating the civil rights icon.

Yes, there are multiple events and ways to honor King's life, but in this case, we mean there have been dueling parades for years.

The question is, why?

Let's start at the beginning.

The Original MLK Parade was founded by civil rights activist Ovide Duncantell in 1978. It was named the official parade for Houston in 2018, with Houston Mayor Sylvester Turner throwing his support behind it.

"Today I announce my support for the parade presented by the Black Heritage Society. A house divided against itself cannot stand," Turner said on July 12, 2018, adding at the time that the city should only have one, unified annual parade to honor King's legacy.

The mayor and other city leaders said dueling parades are not what King would have wanted to see.

Duncantell also served as president of the Black Heritage Society, which organizes the city-backed event in downtown Houston now.

The Original MLK Parade returned to in-person festivities this year after going virtual in 2021 due to COVID-19.

Meanwhile, the MLK Grande Parade, a separate event held in Midtown, also went back to in-person this year. The parade dates back to 1995 and was founded by Charles Stamps.

The MLK Grande Parade website appears to offer a couple explanations for having multiple parades, including an answer that is "tactical and logistical in nature."

"A single parade with all the participants would easily exceed any reasonable, comfortable time for such an event," the website reads. "It would create added safety challenges, traffic and parking issues, and tax the viewing audience."

While that seems simple, it's not quite problem solved.

Over the decades, there have been battles, including one in court, over hosting the rival parades.

ABC13 reported about the fight in 2007, when both the Black Heritage Society and MLK Grande Parade applied for parade permits. But under city ordinance, only one parade could be held in downtown per day. Further adding to the matter, usually applications are chosen on a first-come, first-serve basis but both groups applied at the same time.

There was even talk of having the city's special events director flip a coin to decide who would run the parade the next year.

According to a 2006 article from ABC13's partners at chron.com, the groups had agreed to unify after 10 years of dueling parades. In the report, the Black Heritage Society claimed to be the only group to have the blessing of the King family to hold a parade, which Duncantell went on to do. The parade's website says that King's father commissioned the organization on Jan. 21, 1978 to hold the first MLK Day parade in the nation. King's father was also the first-ever grand marshal.

The Chron reports that Stamps used to be a volunteer with the Black Heritage Society.

In 2018, after Turner said there would be only one parade, Stamps said in part in a statement to ABC13, "We have constructed a working framework for the unification of the MLK parades in Houston. Our organization's legal team are presently looking into whether government has any role other than support for any expressive activity (First Amendment U.S. Constitution), and the validity and authenticity of the supposedly licensing agreement that is in possession of the other parade."

But both events have rolled on business as usual, except for what had to be halted or carried virtually due to the pandemic.