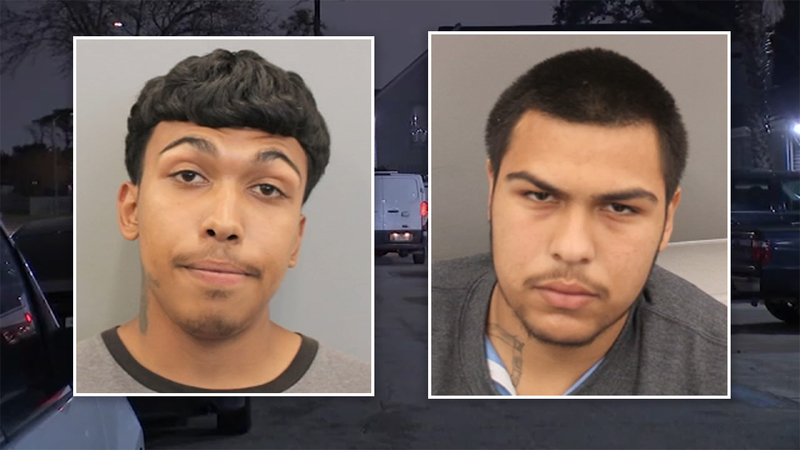 HOUSTON, Texas (KTRK) -- Houston police are asking for the community's help to find a 20-year-old man who is facing a capital murder charge after an 18-year-old was found dead at a southwest Houston apartment complex on Sunday.

HPD said officers responded to the 7700 block of Corporate Drive on Sunday, March 6 and found 18-year-old Angel Rodriguez dead in the courtyard of an apartment complex.

Witnesses initially told police that they saw two Hispanic men run away. The witnesses said the men carjacked another person at gunpoint and used that stolen vehicle to flee the crime scene.

Officers found the stolen vehicle the next morning, abandoned in the 8900 block of Gustine Road.

HPD said surveillance video from the scene shows two male suspects, who haven't been identified, approaching the victim, attempting to rob him.

"At this time, we don't know a motive or anything like that," HPD Homicide Detective Jake Gardner said in a briefing late Sunday night. "Other than, it was a possible robbery that took place and then a shooting subsequently happened."

HPD said after further investigation, surveillance video revealed that brothers, 20-year-old Marco Zavala and 19-year-old Luiz Zavala, tried to grab something from Rodriguez's arm while he was walking through the complex.

According to court documents, Rodriguez and the two suspects struggled, and at one point, all three of the young men were on the ground. Then, surveillance video showed Marco stand up and shoot multiple times at Rodriguez, killing him.

Shortly after, the video showed Marco carjack someone at gunpoint and pick up Luiz's allegedly wounded brother. The pair then fled the scene in the stolen vehicle, police said.

Investigators later found Luiz at a local hospital, and he was arrested and charged with capital murder. Marco is also facing a capital murder charge but is still on the run.

Police shared a previous booking photo from 2021 of Marco. Anyone with information on his whereabouts is urged to contact the HPD Homicide Division at 713-308-3600 or Crime Stoppers at 713-222-TIPS. Remember, you can remain anonymous.

WANTED: This is Marco Zavala, 20, now charged with capital murder in the fatal shooting of a man at 7700 Corporate Dr. on Sunday (March 6).

ARRESTED: This is Marco Zavala's brother, Luiz Zavala, 19, also charged with capital murder in this incident.

He was taken into custody on Tuesday (March 8).