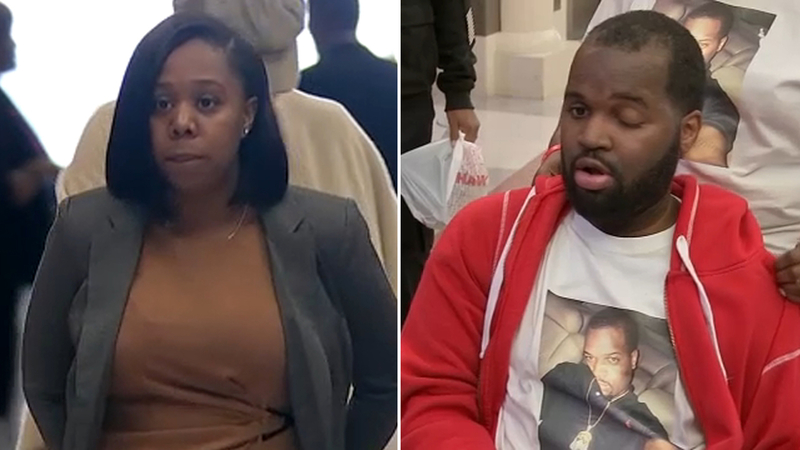 HOUSTON, Texas (KTRK) -- The woman who shot a man in the head while they were broadcasting on a Facebook Live stream has been sentenced to prison.

On Tuesday, Cassandra Damper was sentenced to serve 10 years for an aggravated assault count and five years for a tampering with evidence charge. She pleaded guilty in August to the counts after the April 2018 shooting of Devyn Holmes.

Damper will serve the sentences concurrently.

"So happy. I am so happy," said Holmes afterward, in an exclusive television interview. "It's perfect because it shows a human's life is valuable. Because if he (judge) didn't come with a verdict that good, it was like saying a human's life is not valuable, but he showed me it is. So I'm glad about it."

Earlier in the day, Damper took the stand and tearfully admitted to shooting Holmes.

HAPPENING NOW: admitted shooter Cassandra Damper takes the stand in day 2 of her sentencing. She is weeping, head down and hiding her face behind her hair as her own attorney asks her questions about her life before the #facebookLiveShooting @abc13houston pic.twitter.com/zptEyf5SGX

“I SHOT DEVYN.” Cassandra Damper admits to shooting Devyn Holmes on the stand during her sentencing for the Facebook Live shooting. Crying and refusing to look up she recounts the April 1, 2018 shooting. pic.twitter.com/3n1durNR20

Holmes was shot in the head while he, Damper and another man were inside a vehicle streaming to Facebook. Holmes survived, but has had to undergo rigorous rehab since then.

On the stand, Damper confessed, "I shot Devyn," while recounting what happened on April 1, 2018. She also read a letter in court addressed to Holmes, expressing remorse, sorrow and sympathy for what he's gone through.

"Please know how sorry I am during this tough time. I cannot imagine what you are going through or what you are feeling since this tragic accident," Damper read. "There is no amount of anything I can give you. It has hurt me even more to be unable to assist or be by your side during this recovery process."

The grief got to be too much, Damper said, that she "even thought about killing myself to make it fair."

"I am here to take responsibility for a reckless accident I caused. I was in disbelief because I really thought the gun was not loaded. I was just really scared."

With the Facebook Live shooter awaiting her sentence, the victim in the case came face-to-face with the woman for the first time since he was wounded.

Damper's letter also recounted her thought process in the moments after the gun discharged.

"When the gun first went off, I was in shock, in total disbelief that this can't be real. I felt the best thing to do would be to keep quiet," she read. "Please accept my heartfelt sympathy and apology. I pray that God gives you the strength you need to finish your journey at 100 percent."

The day before, Holmes confronted Damper for the first time since he was shot. He told the court that he believes Damper should receive time behind bars because he has been living in his own prison since the shooting. He's unable to walk, dress or use the restroom alone.

Damper's attorney Monique Sparks maintains the shooting was an accident between friends. Holmes described Damper as just an acquaintance.

Sparks told reporters Damper will ask the court for probation after she serves 180 days in jail.

It was revealed during Monday's proceedings that Damper called 911 and reported Holmes shot himself. It wasn't until the next day that police were able to see the video, which showed Damper pulling the trigger.

The court also revealed that HPD Chief Art Acevedo received a copy of the video from Shaquille O'Neal, who saw it from the "Get It Off Your Chest" Facebook group where the stream was posted.

Detectives who took the stand said Damper on scene kept asking how long it was going to take to answer their questions, adding she needed to catch a flight.

RELATED STORIES:
Woman pleads guilty to shooting man in the head inside car while on Facebook Live