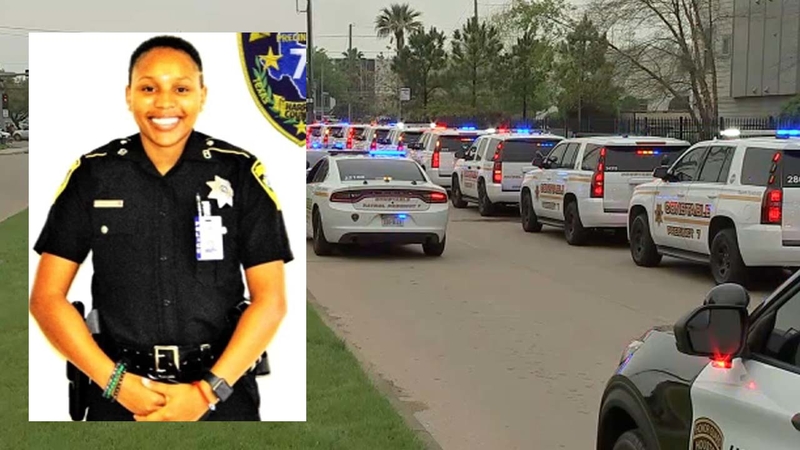 HOUSTON, Texas (KTRK) -- For the second time in a week, the public is honoring a fallen member of the law enforcement community.

On Tuesday, the body of Harris County Precinct 7 Deputy Constable Jennifer Chavis was escorted to the Claire Brothers Funeral Home on Pine Street. Transtar cameras caught the procession on the South Loop around 8:30 a.m.

Video shows law enforcement lined up from different agencies, all honoring Chavis, who was killed over the weekend when a suspected drunk driver crashed into her patrol car.

Adolfo Serrano, 36, is the driver accused of killing Chavis. He could get out of jail.

On Monday, a judge found probable cause and set a $750,000 bond for Serrano despite prosecutors asking for no bond and that he be kept in jail.

Serrano failed to appear at his court hearing.

"I don't know what [Serrano's] current license status is, but the fact that back in the day he continued to drive without a valid Texas driver's license does make me question to what extent Mr. Serrano would follow pre-trial bond conditions," a judge said.

On Saturday, Chavis was trying to pull over the driver and was waiting in a fully marked patrol car on the side of the 7200 block of the South Sam Houston Parkway at Fondren, according to the sheriff's office.


Chavis's patrol car caught on fire. A witness who recorded video of the deputy's car in flames said she heard a big bang before seeing black smoke.

Chavis, 32, was a deputy with Precinct 7 for a year and half.

According to Serrano's defense attorney, the suspect has lived in the same house in the Fort Bend area for the past 15 years with his four children who allegedly depend on his support. His attorney also added that Serrano has worked as a mechanic for the past six years.