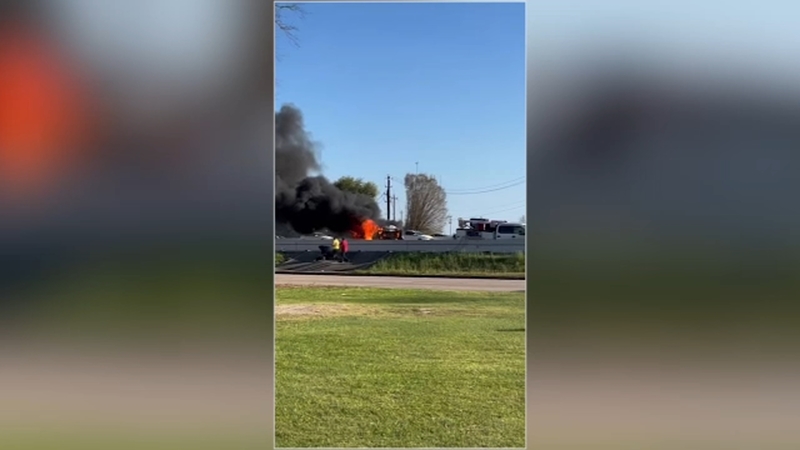 HOUSTON, Texas (KTRK) -- The Harris County Sheriff's office has identified the deputy constable who was killed in a fiery crash on Saturday as Deputy Jennifer Chavis.

Dep. Chavis was responding to a tip about a suspected intoxicated driver around 5:45 p.m. Saturday. She was waiting on the side of the 7200 block of the S. Sam Houston Tollway W. in a fully marked patrol car and wearing an official police uniform, according to the Harris County Sheriff's Office.

The suspected intoxicated driver, identified as Adolfo Serrano, 36, was driving a Ford F-550 when he failed to drive in a single lane and struck Chavis in the rear, according to deputies.

The patrol car the deputy was driving became engulfed in flames. Chavis sustained injuries from the crash and was pronounced dead at the scene.

Update #1 to crash scene on tollway: a Deputy Constable, said to be in the vehicle engulfed in flames, did not emerge from the vehicle. @HCSO_VCD will investigate the scene. Media station area: Fondren @ Beltway, Exxon Gas Station. #HouNews https://t.co/GvKVyTOmV0

A witness recorded video of the deputy's car in flames after it was hit by that suspected DWI driver.

"All of a sudden we heard a big bang," said eyewitness Jessica Cano. "Then, we see black smoke. We ran over here and saw that truck on fire."

Law enforcement lead a procession for Deputy Chavis to the Harris County Institute of Forensic Sciences, at the county morgue.

This case will remain open and will be under investigation by the HCSO's Vehicular Crimes Division.