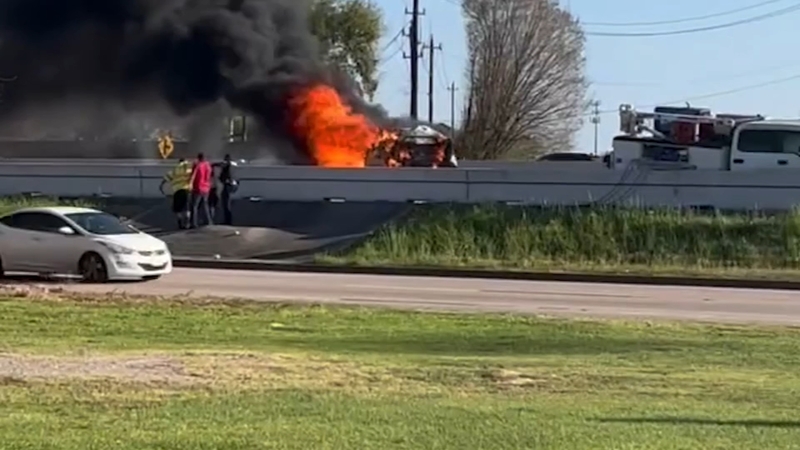 HOUSTON, Texas (KTRK) -- A Harris County deputy constable has died after being trapped in a flaming car on the S. Sam Houston Parkway at Fondren on Saturday evening, according to HCSO.

The deputy responded to a tip about a drunk driver on the tollway. She was on standby to catch the driver and parked on the side of the road. The suspected driver, in a F-550 truck, struck the rear of the deputy's patrol SUV causing it to burst into flames, investigators say.

Update #1 to crash scene on tollway: a Deputy Constable, said to be in the vehicle engulfed in flames, did not emerge from the vehicle. @HCSO_VCD will investigate the scene. Media station area: Fondren @ Beltway, Exxon Gas Station. #HouNews https://t.co/GvKVyTOmV0

A witness recorded video of the deputy's car in flames after it was hit by that suspected DWI driver.

"All of a sudden we heard a big bang," said eyewitness, Jessica Cano." Then, we see black smoke. We ran over here and see that truck on fire."

The suspected drunk driver was in a truck with a utility box behind it and is at the hospital and is expected to be OK, according to Captain McConnell.

Law enforcement lead a procession to the Harris County Institute of Forensic Sciences at the county morgue.

This is a developing story. See back for details.