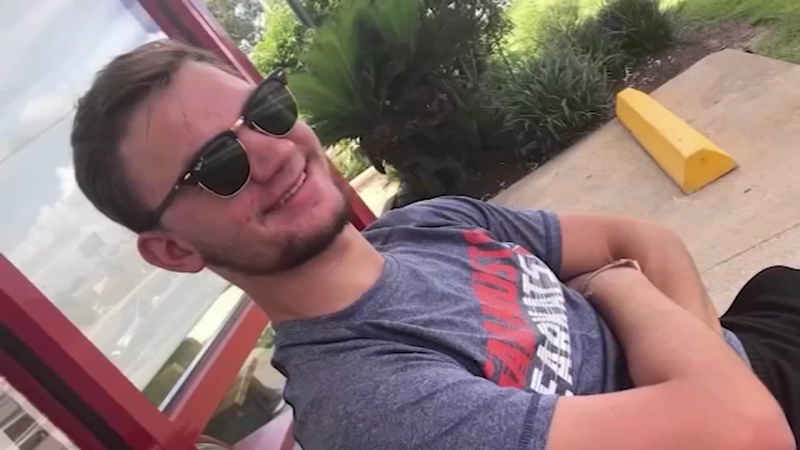 The 21-year-old left school to spend the holidays with his family in Missouri City, but never made it home.

Tuesday, his family and friends will hold a candlelight vigil to mark 365 days since his disappearance, with no new clues in the case.

On Dec. 13, 2020, at around midnight, Jason's car was found crashed outside Luling, and his wallet and phone were inside the car.

NEW PHOTOS: Images released by the sheriff's office show Jason Landry just before he went missing, his car found abandoned, his clothing found near his car and a single blood stain on the clothes he was wearing.

About 900 feet away, outside his car, police found his clothing and a backpack, but no sign of Jason or what happened to him.

"Over the last year, we have searched that whole area over and over and still nothing," said Kent Landry, Jason's father said.

There's a $10,000 reward for anyone with information that leads to his return.

There have been seven major searches over the past year, with the most recent one just two months ago in October, but still no sign of what happened to Jason.

After nearly 300 days, the father of the 21-year-old is questioning which outcome is more likely in the case of his son's disappearance.

ABC13 reached out to the Caldwell County Sheriff's Office, who said:

"The case is still an active missing person investigation. We maintain that there is no evidence of a crime, no evidence of foul play, and no evidence or indication that anyone has knowledge or involvement in the disappearance of Jason Landry. Our prayers are with the family and friends of Jason, as this is no doubt, an anniversary that no one should have to experience. Any information can be submitted to our office."

For Jason's father, the not knowing has been the hardest part of this past year.

Kent says there are theories, like his son possibly died of hypothermia that night and that his body just hasn't been found, or that possibly someone else was involved.

He says the family has asked the FBI to get involved, as well as the attorney general.

"They are starting a new cold case division and we are hoping they take it on, and maybe having a new set of eyes might help bring this investigation to a close and help us have the answers as to what happened to our son," Kent said.

The candlelight vigil starts at 7 p.m. Tuesday at the Southminster Presbyterian Church in Missouri City.