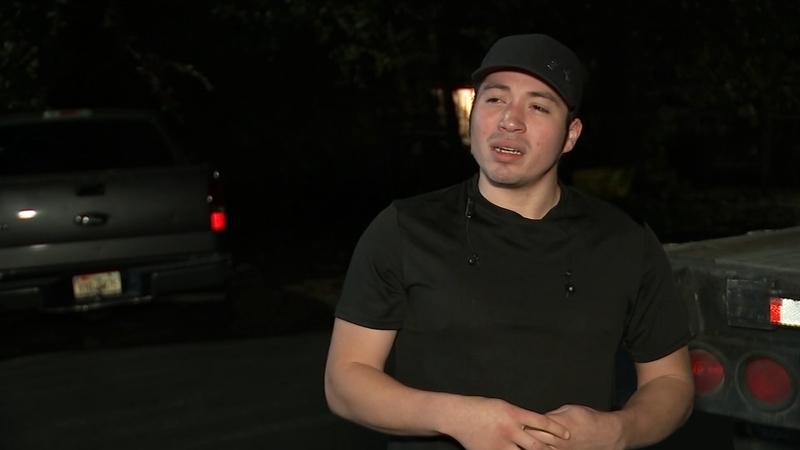 According to 25-year-old Arnold Salas, he was driving with a friend in the near Northside on Oct. 16, when Robert Soliz, 24, started antagonizing him.

He said Soliz, who was driving a light blue Mercedes Benz, repeatedly sped up and then slowed down. When they came to a stop at an intersection, Soliz yelled at him. Salas recognized him from high school.
"He said, 'I'm going to shoot you up. I'm going to shoot your car up,'" Salas told ABC13. "He got out of his car and emptied the whole clip in the car."

He fired eight times at the driver's side, Salas said.

Salas and his friend ducked and escaped unharmed, but in a panic, he put the car in reverse and crashed. It was totaled.

"I've lost everything because of him. I can't get to work. I'm basically homeless."

Salas was not surprised, he says, when he learned that Soliz was charged with murder for the shooting death of Sgt. Rios.
Chief Art Acevedo told reporters Tuesday that Rios was intervening in a road rage incident on the North Freeway involving Soliz. Soliz's attorney has called those circumstances "radically wrong." Soliz was driving the same Mercedes.

Prosecutors talked about the aggravated assault case during court on Thursday. It was one of two new aggravated assault charges filed against Soliz unrelated to the sergeant's murder. The other is for allegedly pointing a gun at a gas station store clerk in January.

A family member of a 24-year-old accused of an HPD sergeant's murder insists the gun battle that led to the killing was in self-defense. The video above has more on what the relative told ABC13.

It's time to help police. In the video, take a good look at a person of interest that HPD is looking for after the killing of Sgt. Sean Rios.