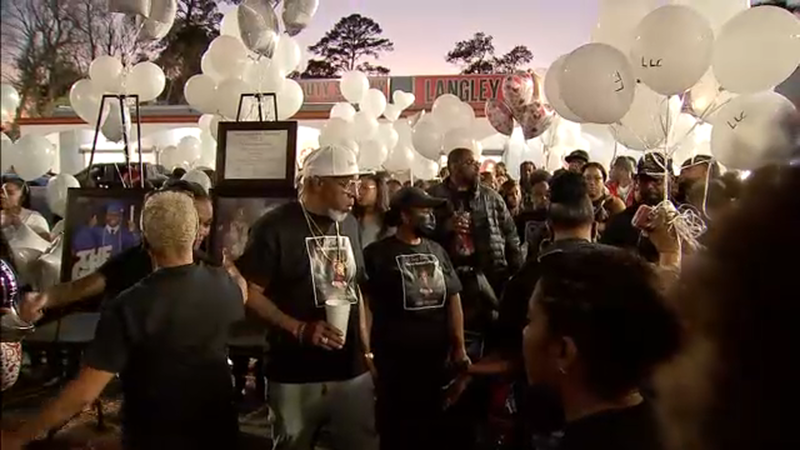 HOUSTON, Texas (KTRK) -- More than 100 friends and family members of a man shot to death by police gathered Friday evening for an emotional vigil.

SEE MORE: 'I want justice for my son': Grieving mother accuses HPD of false charges before son was killed

Carrying white balloons and wearing matching T-shirts, they met at the Langley Market on Houston's north side.

The vigil was in honor of Charion Lockett, who was shot and killed by police while they tried to execute an arrest warrant at his home on Monday.

Houston police said Lockett opened fire first, prompting officers to respond and ultimately killed him. Lockett's family has disputed that version of events and point to the fact that Lockett had no criminal record, and had a Master's degree in criminal justice.

Shanetta Lewis, Lockett's mother, told ABC13 on Thursday that police did not identify themselves before opening fire. On Friday, Lewis was escorted to the center of the parking lot surrounded by loved ones. She was too emotional to speak, but many friends were willing to speak on her behalf.

Houston police said Lockett was wanted for an aggravated robbery charge, but his family believes he was framed for the crime.

Both sides said body-worn cameras will be crucial in the investigation. Houston police should release some of the video within 30 days. For now, the department had no other comment pending the outcome of internal affairs investigation.