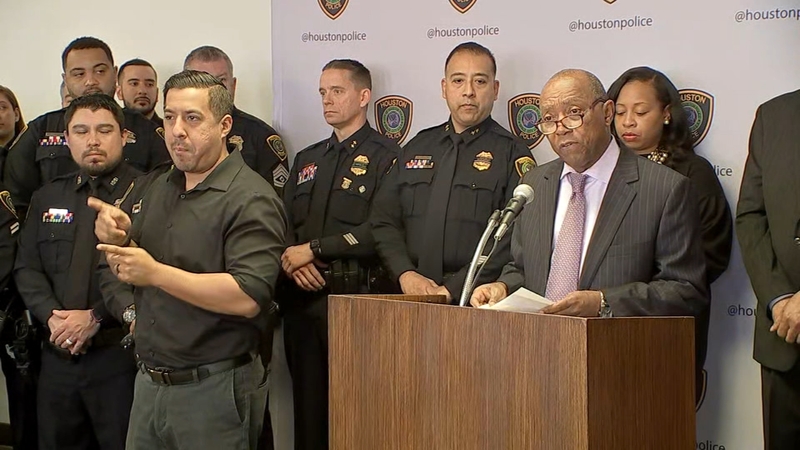 March on Crime is a citywide crime prevention campaign used to educate and inform the public about crime trends throughout the Houston area.

Since 1984, the City of Houston has chosen a crime topic to educate the public in March. They have chosen issues like juvenile crime, neighborhood watch, and personal safety in the past.

"We are using a very data-driven approach that engages all of our residents and really brings police officers in the community in a way that's educational and supportive so that we can build relationships," said Carvana Cloud, HPD's Office of Community Affairs Deputy Director.

In 2022, March on Crime will focus on road rage, domestic violence, homicides, shootings, theft of firearms from vehicles, and other crime issues that affect the community for the program's 38th year.

"This is a can-do city. We are resilient, and we will get through this together," Turner said about rising crime. "I know there is not a better police force anywhere than the one that is right here in the City of Houston."

Turner said initiatives like March on Crime and the recently-announced One Safe Houston are built on the premise that no one group can fight crime alone. He said everyone must take responsibility to help keep the city safe, not just law enforcement.

"If we all work together on that end, I think you are going to see some immediate results," Mayor Turner said.

Finner said like years past, the city is focused on educating the community on crime trends and crime prevention, especially when it comes to homicides and shootings.

"The sky has not fallen. We have good people. We have good police officers," Finner said. "If we come together, we'll get it together. We're moving forward."

The program came to be over concerns of growing crime numbers. Now, 38 years later, the city is in the same situation. Homicide numbers are still up significantly from years past. Finner said at the press conference Tuesday that there have been 86 murders in the city so far in 2022. That's compared to 66 at this time in 2021 and 51 in 2020.

Overall violent crime, however, is down. A comparison of reported crimes in the past three Januarys shows that rapes, prostitution, and robberies have gone down each year. Aggravated assaults, simple assaults, drug violations, and vandalism increased from January 2020 to January 2021 and then decreased in January 2022.

Motor vehicle thefts have increased over the last three years as well.

Through One Safe Houston, Finner said law enforcement has identified areas of most crime concern throughout the city. Officials, however, recognize that crime moves around and are looking at daily, weekly and monthly data to track changes.

Just in the past few weeks, Troy Finner said HPD has arrested 11 wanted murder suspects, and in the process, 24 other felons were also arrested.

In the past few weeks, Finner said HPD had arrested 11 wanted murder suspects, and in the process, 24 other felons were also found and arrested.

"One thing about criminals, they hang together," Finner said. "So, we're going to keep fishing in those areas."

As for domestic violence, Finner commended groups like the Domestic Abuse Response Team (DART), which pairs victim advocates with police officers to respond to scenes and assist victims.

Finner advised all Houstonians who keep a firearm in their car to invest in a safe when it comes to guns stolen from vehicles.

"They are hitting a lot of high-rise parking garages," Sgt. Tracy Hicks, with HPD's auto theft division, said. "We had one last Saturday. They broke into 66 cars in one night, but nothing was stolen. What they were looking for were guns. They left laptops. They left purses."

He said there were 3,600 guns stolen last year, many of which are later used in violent crimes.

He and Turner hope the gun buy-back program, as part of One Safe Houston, can also help get firearms off the streets.

Finally, Finner said when it comes to road rage, cases are already starting to decrease thanks to efforts made by HPD.

He said the department will continue to deploy officers in uniform and plainclothes to patrol Houston's roadways.