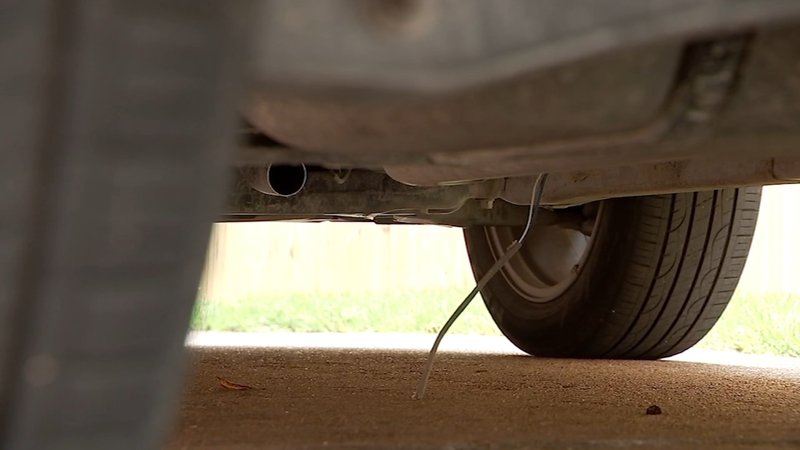 HOUSTON, Texas (KTRK) -- It took less than a minute for a thief to drive up, crawl under a man's car and steal his catalytic converter.

"I was blown away when I saw the video how quickly it was done," said Colman Ryan, the owner of a Mitsubishi SUV that is now without a catalytic converter.

Ryan's catalytic converter was stolen Tuesday morning outside of his southwest Houston home. It happened on the one day he said he happened to park in the street instead of the garage.

"I tried to be vigilant, but I slipped up and they got me," said Ryan, who was told it may be months before the replacement parts arrive.

"I called the Mitsubishi dealer, they said just months back ordered. They said that orders back in December have not (shown) up yet," said Ryan.

It is a huge headache and a costly one that many Houstonians are dealing with as the theft of catalytic converters continues to be a crime on the rise.

The trend continues this year, with nearly 2,000 incidents reported in just the first two months of the year.

"End of 2020, we started seeing an uptick and what was the difference was the price of the metals that are in a catalytic converter went up and that's when thieves realized 'Oh I can get more for these parts,'" said Sgt. Tracy Hicks with the Houston Police Department Auto Crimes Task Force.

SEE ALSO: Victim of catalytic converter theft? This man may have a fix for you

Hicks explained there are three precious metals in a catalytic converter, which is why they can be sold for quick cash.

"If I am walking into a grocery store and I see someone pull in beside me with a Tundra, I'll actually stop and say, 'Are your cats covered yet?" said Hicks.

Hicks said the Toyota Prius and Toyota Tacoma are also heavily targeted, as well as the Honda CRV and Honda Element and many larger SUVs and trucks.

For those who drive any of these car models, Hicks says "It's not a matter of if, it's when you will be a target."

SEE ALSO: This tip could help stop catalytic converter thieves and it'd cost you about $10

"The thieves, they've stepped it up a notch. We've got a lot of new players and that's the scary part," said Hicks.

He says criminals often "stay in their lanes." However, that is not the case when it comes to some who are stealing these converters.

"We are seeing you know people who used to rob people now stealing catalytic converters. Well, people who rob people are used to carrying a gun 'to work,' you know what they do," said Hicks.

His advice is if you see someone stealing your catalytic converter, snap a picture of their license plate, if you can do so safely. But he urges people to not confront the thieves, it's not worth it.

Ryan, though he's out a $1,000 and may be waiting months for a replacement part, is thankful that is the extent of his loss.

"I wouldn't go out there and confront someone. Not after (Deputy Darren Almendarez) was killed. I mean you've got a well-seasoned veteran officer, highly trained. You think I would stand a chance? It's not worth losing your life," said Ryan.