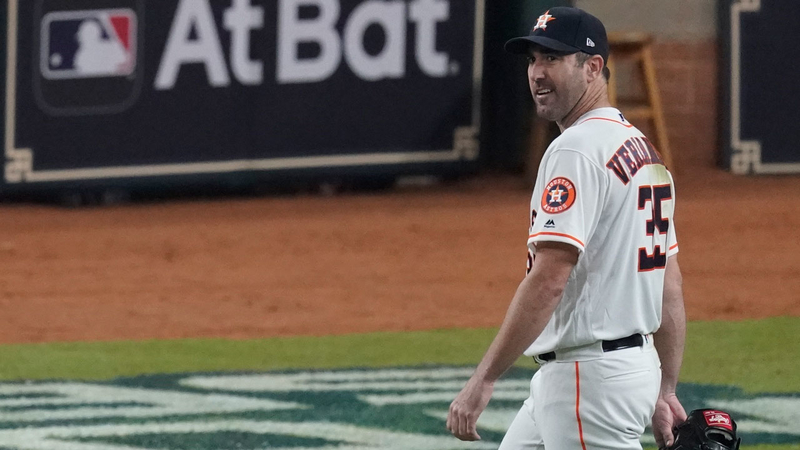 Famously held out of the postseason seven years ago, Strasburg delivered on the biggest stage of all Wednesday night.

The right-hander outdueled fellow ace Justin Verlander, overcoming a shaky start to give the Washington Nationals a 12-3 win over the Houston Astros and a commanding 2-0 lead in the World Series.

Kurt Suzuki hit a tiebreaking homer in what became a messy six-run seventh inning, and the Nationals headed back home to Washington for the next two games - three if needed.

Adam Eaton paraded around the bases pointing to the Houston crowd after a late home run as the Nationals won their eighth in a row. They've won 18 of 20 overall dating back to the regular season, with the last two over AL Cy Young Award favorites Gerrit Cole and Verlander.

Game 3 is Friday night when Aníbal Sánchez opposes Houston's Zack Greinke in the first World Series game in the nation's capital since 1933.

The 31-year-old Strasburg had waited years for this chance. Back in 2012, he was about two years removed from Tommy John surgery when Nationals brass decided protecting his elbow was more important than pitching him in the playoffs, so he was shut down late in a season full of promise.

Making his Series debut, Strasburg allowed a two-run homer to Alex Bregman in the first before throwing five shutout innings to improve 4-0 this postseason. He allowed seven hits and struck out seven.

Nationals manager Dave Martinez was asked what's allowed Strasburg to be so good this postseason.

"One, he has the confidence to do it and two, he's become a premier pitcher, a big-game pitcher," Martinez said. "He doesn't get rattled."

Verlander, so good in the regular season, fell to 0-5 in six World Series starts. He gave up seven hits and four runs, and was lifted after walking a batter following Suzuki's home run.

Verlander led the majors with 21 wins this season and struck out a career-high 300 to reach 3,000 in his career. He has a World Series ring, MVP and Cy Award trophies, and three no-hitters on his resume.

He struck out six to become the career leader in postseason Ks with 202 - another impressive statistic on a stellar resume that's still missing that elusive World Series win.

Their dominance against Houston's best pitchers turned the underdog Nationals into heavy favorites to win the title. Only three of the previous 25 teams to lose the first two games at home under the 2-3-2 format have come back to win the Series. No one has done it since the 1996 New York Yankees.

"I wish I was a betting man, but I'm not," Martinez said. "I don't really believe in that stuff ... we're here because the boys never gave up."

But the Astros insist the tough start hasn't dampened their confidence.

"We have a really good team," manager AJ Hinch said. "Clearly, the Nats have outplayed us - bottom line. They came into our building and played two really good games. We're going to have to try to sleep off the latter third of this game."

Things went wrong immediately for Verlander when he walked leadoff man Trea Turner on four pitches. Eaton, who homered in the eighth, singled before Anthony Rendon, the Houston native who said he'd certainly have 100 friends and family members at Minute Maid Park for each game, knocked a ball off the wall in left field for a double that put the Nationals up 2-0.

Michael Brantley singled with two outs in the bottom of the first before Bregman's homer to left tied it. After hitting .167 with no homers in the ALCS and struggling in the opener of this series, Bregman took a second to admire his homer before nonchalantly tossing his bat and trotting to first.

All eight of Bregman's postseason home runs have come off All-Stars.

Verlander got his 200th postseason strikeout when he fanned Victor Robles for the second out in the second inning. The eight-time All-Star passed John Smoltz, who had 199 and was in the TV booth for Fox to see his record fall.

Verlander and Strasburg both settled in after their early wobbles and neither pitcher allowed the hitters to string much together until things fell apart for Houston in the seventh.

Suzuki sent Verlander's 100th pitch sailing above the seats in left field to start the inning and put the Nationals on top. Ryan Pressly, who left Game 6 of the ALCS with a knee injury, took over and didn't look right from the start.

He walked Turner before Hinch called for his first intentional walk of the season when he gave Juan Soto a free pass to load the bases with two outs. Howie Kendrick, Asdrúbal Cabrera and Ryan Zimmerman followed with successive singles to bust this one open, putting the Nationals up 8-2. As those hits were piling up and run after run crossed the plate, many in the stunned sellout crowd of 43,357 began streaming for the exits.

Hinch was asked what happened in the seventh inning.

"Where would you like me to start? The leadoff homer? That's what happened," he said. "It started with the leadoff homer and then a tough at-bat with Robles."

Michael A. Taylor padded the lead further when he hit a solo homer off Chris Devenski in the ninth.

The only time Strasburg was under any kind of real duress after the first inning came when Yuli Gurriel doubled with one out in the sixth before the Nationals intentionally walked Yordan Alvarez. But slumping Carlos Correa hit a weak fly ball for an out before rookie pinch-hitter Kyle Tucker struck out to allow Strasburg to wriggle out of the jam and end his solid night.

While the game was still close, Verlander made a play guaranteed to put him on the World Series blooper reel. It came in the fourth inning when he spun to the ground and skidded on his back to snag a soft tapper from Zimmerman on the third base side. The grab was fine, but his worst throw of the night came next when he bounced it off his left shin. He got to his feet to reveal grass stains on the back his jersey and on his hip, shook his head and chuckled at his errant toss.