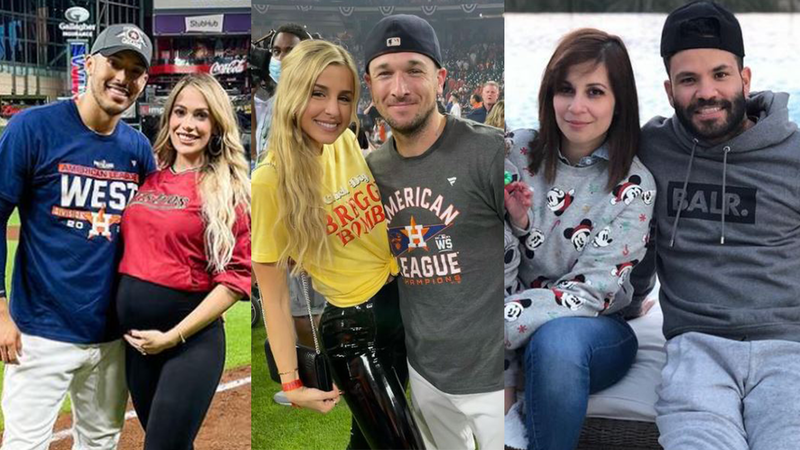 HOUSTON, Texas (KTRK) -- Sure, bringing home a World Series title creates some memorable in-game moments, but who can forget the grand gesture by Carlos Correa after the Astros won in 2017?

The shortstop proposed to then-girlfriend Daniella Rodriguez right after that Game 7 victory over the Los Angeles Dodgers, meaning Correa and Rodriguez both left with rings.

Fast forward four years, and not only are the Astros heading back to the World Series, but quite a lot has changed for Correa and Rodriguez, too.

They are now married and expecting their first child, a boy. 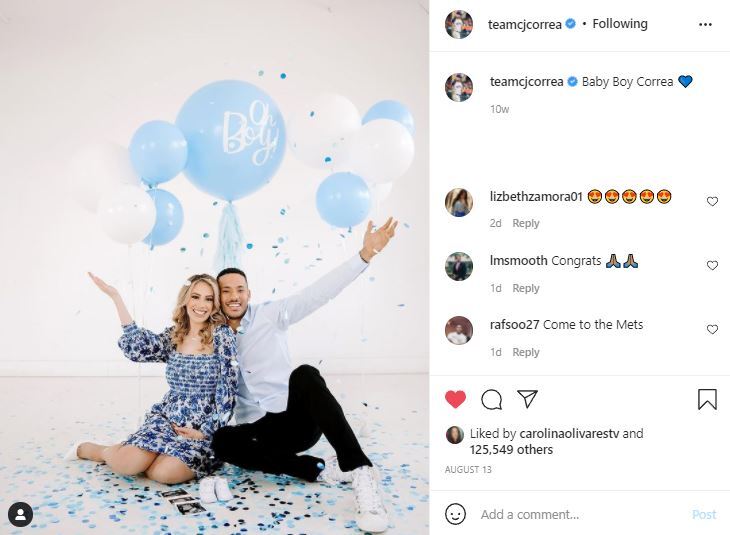 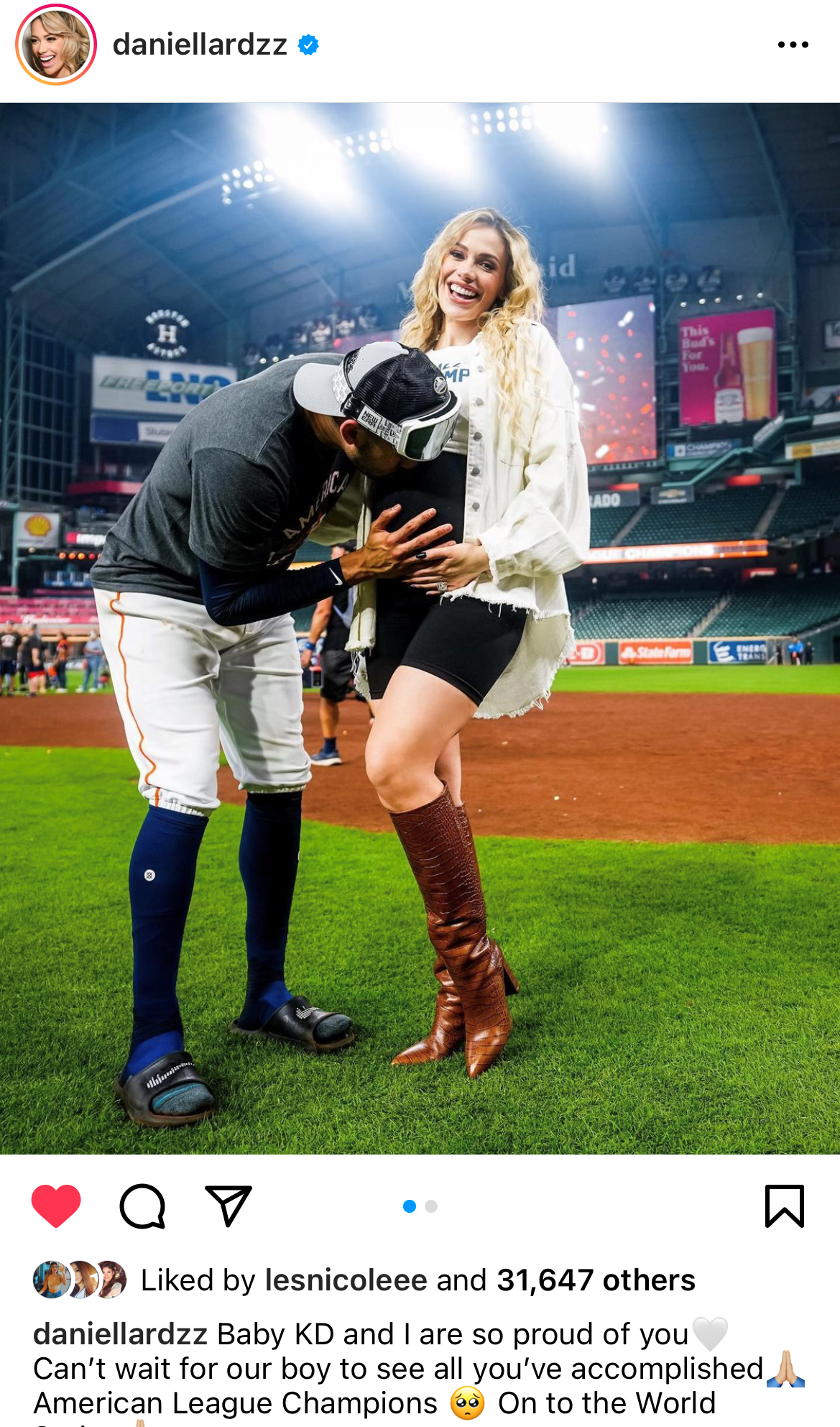 I am way too emotional and pregnant for this 😭🥺😩 🧡 https://t.co/ZVTUMwIB1Q

Rodriguez, now Correa, was Miss Texas back in 2016. She has since launched a YouTube channel and her own cruelty, vegan and paraben free make-up line, Sweet D by Daniella Correa.

Like Carlos Correa, many of the Astros are family men.

Jose Altuve is a girl dad. He and wife Giannina, also known as Nina, are the parents of two girls.

In 2019, the couple announced they were expecting their second daughter with a sweet gender reveal involving pink smoke and confetti.

Eldest daughter, Melanie, has previously been spotted with her mom checking out the games, and when it comes to her dad, she appears to be his doppelganger!

Third baseman Alex Bregman is getting ready to celebrate his first wedding anniversary.

He tied the knot with girlfriend Reagan Howard, now Bregman, in December 2020.

In a sweet Instagram post from the winter wedding, the now-Mrs. Bregman said, "Married to my best friend."

She runs her own brand, Exiza, described as "ethical athleisure wear" garments made in the USA.

Reagan Bregman is about to launch her own ethical athleisure brand…clothing you can feel good about! https://t.co/jMrZmVjYFo #yoga #fitness #clothingbrand #clothingforwomen

According to our partners at CultureMap Houston, Reagan Bregman hails from Louisiana and was later raised in Katy.

Before Yordan Alvarez was crowned the American League Championship Series MVP, he became a father of two.

He and his wife, Monica, welcomed their second child, a son, in July.

Alvarez went on paternity leave, but when he returned to the lineup, he certainly made his presence known, blasting two home runs at the time to help the Astros come back versus the Oakland A's.

Known for a hairstyle that earned him the nickname, La Piña, first baseman Yuli Gurriel is also a proud husband and father.

In 2018, he shared photos of his newborn son, Jayren, and was also placed on paternity leave at the time.

Gurriel also has another son.

We haven't seen Justin Verlander since he underwent Tommy John surgery last year, but he's not shy about being a doting father and husband.

Verlander and his supermodel wife Kate Upton welcomed their daughter Genevieve in November 2018. Upton has been featured as a Sports Illustrated swimsuit model and has acting experience as well. You may have seen her alongside Cameron Diaz and Leslie Mann in "The Other Woman."

She has since created strong4mefit, a 12-week fitness program designed for women, according to the company's Instagram bio page.

Pitcher Zack Greinke is married to fashion blogger and former Dallas Cowboys cheerleader Emily Greinke. Together they've been raising two beautiful boys, Bode and Griffin, but their family is growing.

She shared on Instagram that they are expecting Baby #3, another boy.

The last time the Astros were in the World Series in 2019 pitcher Lance McCullers and wife Kara were awaiting the birth of their first child.

They've since welcomed a little girl, Ava, who turned one year old in December 2020.

Michael Brantley is affectionately known to some as Uncle Mike and even "Dr. Smooth," but his children have a simpler name for him: Dad.

Brantley is married and the proud papa of three kids.

After the Astros advanced to the World Series last Friday, it was Brantley's oldest child, daughter Mariah, who stole the show.

Brantley held Mariah in his arms as he addressed reporters on the field. And Mariah, ever the star in her own right, rocked sunglasses and when asked what she thought of the season uttered four heart-melting words that would easily elicit a chorus of "awws": "I love my dad."

Well, you can't beat that. Sounds like being smooth runs in the family.

If you're a single fan of catcher Martin Maldonado, sorry, but he's not going to be the one for you.

We're sure you're an amazing person, but it turns out, "Machete" Maldonado is also a happily married family man, as seen in his Twitter profile picture and header photo.

He also posted on Instagram that he and wife Janelise recently celebrated 11 years of marriage.

Congrats, you lovebirds you!

Wow, don’t have much to say… Last night was fun. We love each other