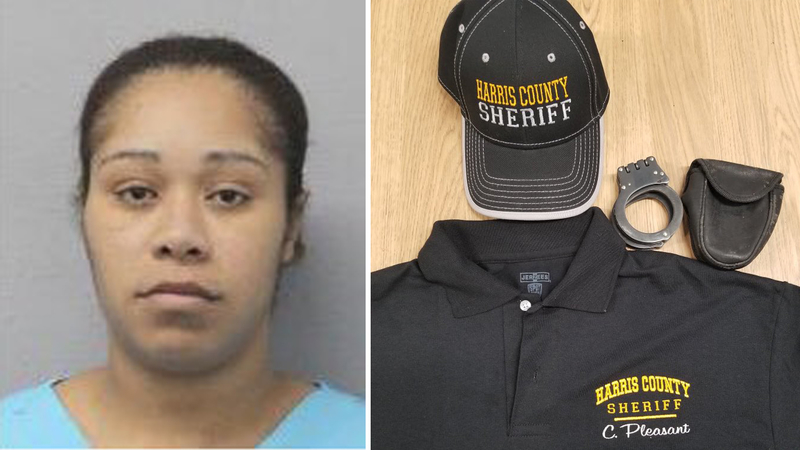 SPRING, TEXAS (KTRK) -- A Home Depot employee pretended to be a Harris County Sheriff's deputy so that customers would feel obligated to show her their receipts, according to court records.

Charla Pleasant, 35, is charged with false identification of a peace officer, a misdemeanor.

Charla Pleasant is charged with false identification of a peace officer. @HCSOTexas says she is really just a @HomeDepot employee who was wearing these items. At 10-WHY she said she was wearing them. Photo via HCSO. pic.twitter.com/I8d4QPGVeg

Pleasant was arrested on Friday at The Home Depot located at 20131 North Freeway in Spring.

She was carrying handcuffs and wearing a polo and hat with the words "Harris County Sheriff's Office" printed on them, deputies say. The shirt also had her name, according to authorities.

According to court records, when a deputy asked Pleasant about her employment, she allegedly told him she worked for a sheriff's office storefront, but was on light duty due to a medical procedure.

She could not show credentials because she is not a sheriff's office employee, officials say. After further questioning, a deputy says Pleasant admitted to wearing the items so that customers would feel obligated to show her their receipts.

ABC13 asked The Home Depot if anyone was aware of the situation. A corporate spokeswoman responded, "The best source of information is the police."

At Pleasant's home, her mother downplayed the arrest and said she was only wearing a shirt. Her daughter never responded to a request for comment.

Pleasant is out on bond awaiting her next court date on Friday.