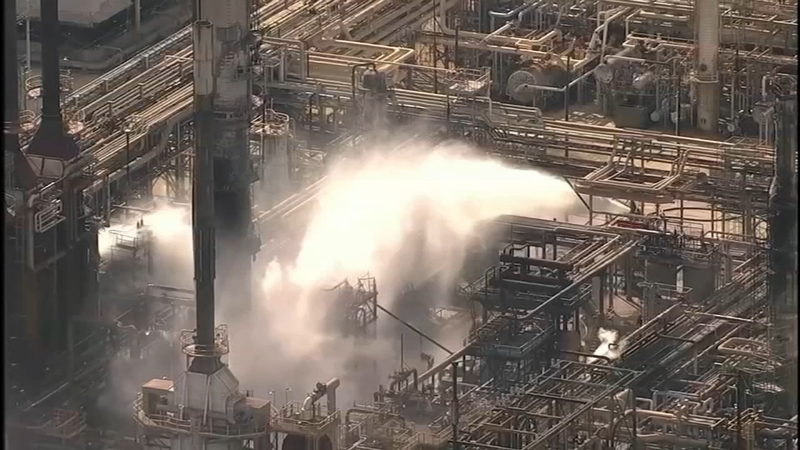 A fire broke out at ExxonMobil's Baytown refinery around 1 a.m. Thursday, making for yet another rude awakening this year for east Harris County residents.

"I heard this huge explosion, 'Boom,' it rocked this whole house. Knocked me out of my bed, woke me up, scared me to death," explained Sharon Rogers, a longtime Baytown resident.

Cannon Robertson also lives near the refinery and woke up after he said he felt his house shake and then saw the flames.

"We just heard my dad run outside and it was just a huge fire. Smoke. You could smell it. I mean you can always smell it out here, but you could really smell it," Robertson said.

By mid-morning Thursday, the flames were extinguished. The unit that burned made gasoline and the chemical that burned was naphtha. The cause of the fire is still under investigation by the Harris County Fire Marshal's Office and ExxonMobil.

The Harris County Fire Marshal's Office did not say outright there was an explosion, however, many neighbors said they felt one.

"I heard a Kaboom.' I got out of bed, found out my back doors were opened for me," explained David Pierce.

A lawsuit has already been filed in relation to the incident claiming a nearby home was badly damaged. Four people working at the refinery were also hurt. As of Thursday evening, two of them remained in the hospital.

When we asked about concerns from the community, ExxonMobil released a statement saying in part,

"We are committed to being a valued and respected member of the Baytown community, and we understand that public respect and confidence are earned through performance, open communications and community involvement,"

Rogers said she does not feel the company is holding up its end of the deal when it comes to being a good neighbor.