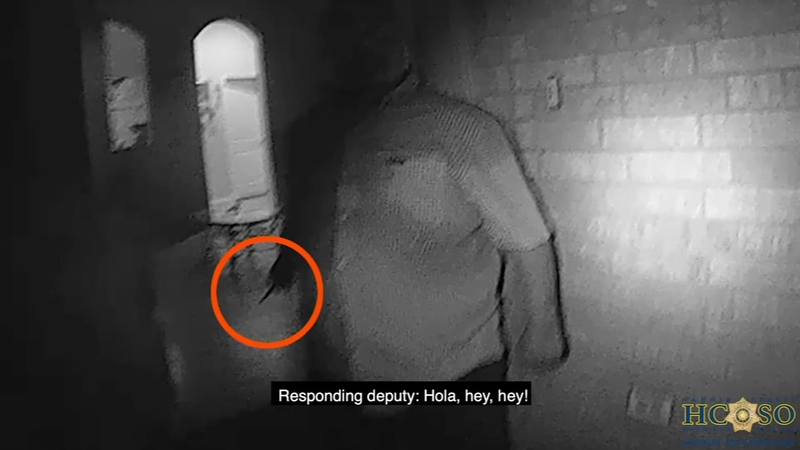 SPRING, Texas (KTRK) -- Last week, the family attorney of Marcelo Garcia, the man who was shot and killed by a Harris County deputy, was adamant that the 46-year-old did not have a knife during the incident that led to his death. But this week, the released body camera video shows Garcia did have a knife in his hand.

On Tuesday, the Harris County Sheriff's Office provided updated information on the shooting that happened on Wednesday, April 14, in the 5900 block of Sunflower Prairie Court in east Harris County. Not just that, but the sheriff's office also released the bodycam video of the deputy who responded to the scene, which resulted in the death of Garcia - whose family says was in mental distress.

The incident began when a woman called 911 around 1 a.m. saying her husband was in a mental health crisis, according to deputies.

While deputies were on their way, investigators said dispatch also called for a mental health unit to come to the scene.

However, deputies say the mental health unit was already on another scene, so only the deputy responded.

Upon arrival, the deputy was met at the front door by Garcia, investigators said. According to the sheriff's office, the deputy told Garcia to drop the knife, but he "aggressively approached the deputy."

The deputy reportedly tried to use his Taser on Garcia, but investigators said it didn't work. That's when the deputy fired his gun several times, hitting and killing Garcia.

"His hopes were to try and deescalate it, talk to him, see what was going on. But as soon as Marcelo opened the door, he was armed, with a knife, the deputy was retreating basically on his heels," Sherif Ed Gonzalez said.

Prior to Tuesday's news briefing, the Harris County Deputies Organization released the following statement regarding the shooting:

On April 14, 2021, HCDO FOP Lodge 39 attorneys responded to a deputy-involved shooting in East Harris County where our deputy responded to a call for service. While at the scene, our deputy was confronted by an aggressive male suspect who was armed with a knife. The deputy attempted to back away and use a taser on the suspect but the taser was ineffective. Finally, our deputy had to use his firearm to defend himself. Our deputy had to take immediate action and acted courageously. HCDO FOP 39 firmly believes that all life is precious and that is why we, as law enforcement officers, work day in and day out to protect the community. HCDO FOP Lodge 39 fully supports our deputy and his actions. Everyone wishes our deputy was not forced to defend himself against the armed suspect, resulting in this tragic outcome. We wish that this man had not taken the steps he did to attack our Deputy with a knife in front of his children. No law enforcement officer puts on the uniform and hopes to be involved in a situation such as our deputy found himself in that night, but these incidents are the reality of the job. Our deputy relied on his training and took the actions necessary to protect himself and the community. Our deputy went beyond what is generally required in these situations. He acted appropriately in all regards and with the goal of protecting the family and the community.

When questioned about why Garcia's family and family attorney were not allowed to view the bodycam video prior to its release, Gonzalez said he did reach out to them but had not heard back.