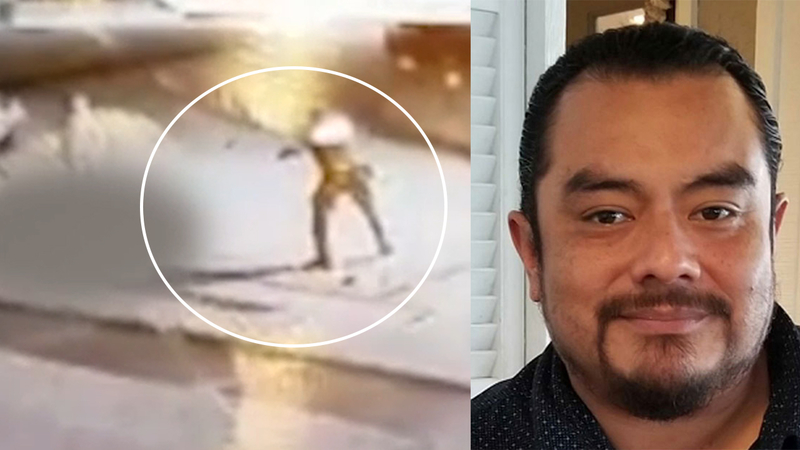 Marcelo Garcia, 46, whose family says struggled with mental illness his entire life, was shot to death in east Harris County Wednesday morning. The family of Garcia spoke with reporters on Thursday.

THREAD: Marcelo Garcia was shot and killed by a Harris County Sheriff’s Deputy, after experiencing a mental health crisis. The Sheriff’s Office says Garcia had a knife when he answered his door & approached the deputy. Garcia’s family says he was unarmed. pic.twitter.com/zv7ah21kqS

Garcia was killed in front of his wife and children. 💔 He suffered from schizophrenia, and although a mental health unit had been called to his home several times before, experts were successful in de-escalating the situation. This time, deputy came alone. pic.twitter.com/GgQNOrtFxE

The surveillance video was provided by a neighbor. In the video, after Garcia's body hits the ground, his young children are seen running up to him, screaming. Garcia's family said he went almost nine minutes without any help.

This is surveillance video from a neighbor. For obvious reasons, we’ve blurred Marcelo’s body. After he hits the ground, you see his young children run up to him, screaming. 😔 His family is outraged; says almost 9 minutes went by with no aid rendered. pic.twitter.com/JMmi35q2q7

According to deputies, a woman called 911 around 1 a.m. saying her husband was in a mental health crisis. While deputies were on their way to the residence on Sunflower Prairie Court, investigators say dispatch also called for a mental health unit to come to the scene.

However, deputies say the mental health unit was already on another scene, so only the deputy responded. Upon arrival, the deputy was met at the front door by a man armed with a knife, investigators say.

According to the sheriff's office, the deputy told the man to drop the knife, but the man "aggressively approached the deputy." The deputy reportedly tried to use his taser on the suspect, but investigators say it didn't work.

That's when the deputy fired his gun several times, hitting and killing the 46-year-old man, according to the sheriff's office.

Garcia's sister says he was a married father for four girls and struggled his entire life with schizophrenia and had bipolar disorder. She says when Garcia was having an episode, his wife would call 911, and deputies who were trained to handle his mental health conditions would come out and de-escalate the problem.

"I'm not going to say bipolar and schizophrenia isn't scary. I had to get trained, as a sister growing up, for him," Jessica Garza said. "We had to learn the coping skills. We had to get him diagnosed. I'm not going to deny that it's scary, but you don't kill him."

ABC13 asked if one mental health team for the entire area is enough. Here's what the sheriff's office assistant chief said.

"It's not enough. We have what's called a co-responder team, where deputies have a certified, master's level mental health clinician in the car that rides with them. We're one of the few departments in the nation that have them. They are not cheap. They are fairly expensive units," Assistant Chief Mike Lee said. "We do not have enough to provide adequate coverage around the county. We would like to see an increase with those units. And unfortunately, like what happened tonight, they are usually tied up on another call."

On Wednesday morning, a sheriff’s deputy encountered a man with a knife in the midst of a mental health crisis. Tragically, the encounter ended in the man’s death and now his family is grieving their loss. I share in that grief. I also understand the community expects a

thorough and transparent investigation. I’m committed to doing that. We will release body camera video as soon as we’re able to do so without hindering the investigation.

Lee said deputies have been to the house several times before, responding to mental health and drug calls. He said the last time they were there was on Thursday, April 8.

The deputy involved was not injured.

"We run tens of thousands of mental health crisis calls. Sending armed officers to mental health calls is not the ideal situation," Lee said. "Unfortunately, sometimes these issues fall through the cracks because the person can't receive the mental health care that is needed. The last resource, many times, is calling the police in these situations, which is not always ideal."

The deputy who shot Garcia has been with the sheriff's office for seven months.