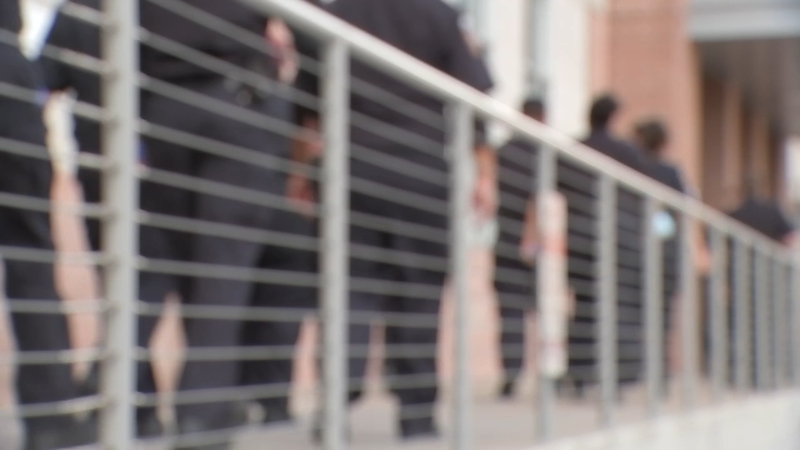 HOUSTON, Texas (KTRK) -- Two detention officers are recovering after authorities said they were attacked while working inside the Harris County jail Monday evening.

The Harris County Deputies' Union said the two veteran detention officers, a man and a woman, were attacked when they went inside an inmate unit.

"Two detention officers went to the hospital, both are experienced detention officers with each having about 10 years of experience at the sheriff's office," said Robin Foster, an attorney with the union.
"The male has a broken ankle and a broken nose. His jaw is swollen but not broken but he has a black eye. The female has swelling in her head and lacerations. She was struck many times in the head by the inmate."

The Harris County Sheriff's Office confirmed that Jarell Barrow, who is currently in jail on capital murder charges, is the suspect in the attacks. The Harris County district attorney's office said 20-year-old Barrow is facing several additional charges.

The latest attack comes a week after a sergeant inside the jail was sexually assaulted.

In addition, according to Harris County Sheriff's Office's own statistics obtained by ABC13, assaults inside the jail have risen sharply.

Records show there were 9,116 assaults on inmates, assaults on staff or fights in the five years from 2016 through 2020. This year alone, that number jumped to 9,928. That is 100 more assaults than in the previous five years combined.

The statistics are sobering but not surprising for Professor Michele Deitch, who is the director of the new prison and jail innovation lab at the LBJ School of Public Policy at UT Austin.

"If you got a crowded facility, it doesn't matter how many staff you have in there. The dynamic is such, it's going to be a very tense environment that leads to violence," said Deitch, who has done extensive research on the issue.

Deitch said that any time you have large jails with thousands of inmates, the risk of violence increases. Add to that the ongoing COVID-19 restrictions, and it's a recipe for people to get hurt.

"The reality is that poor conditions in a facility and overcrowding are going to make conditions unsafe," said Deitch. "Resources are always important. But it's not the only thing that matters. We need to get the number of incarcerated people down. That will be safer for everyone."