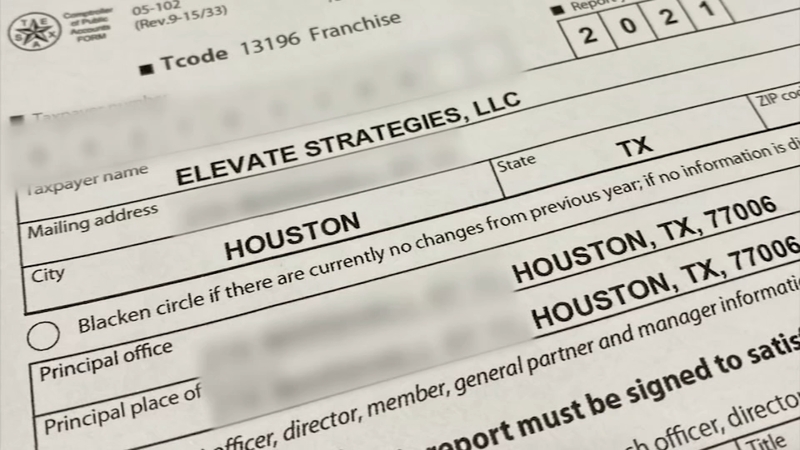 "I know that there are a lot of allegations swirling around and I'd love to respond to them," Hidalgo said during a break in Tuesday's Harris County Commissioners' meeting.

Even though the judge responded to reporters' questions for about 18 minutes, Hidalgo offered little to no details about her or her staff members' discussions with Elevate Strategies founder, Felicity Pereyra, prior to her being awarded the contract in June 2021.

"Because it's an ongoing investigation, I can't address many of the misleading and sometimes false allegations that are swirling around as much as I'd want to and you guys know that I'd be the first one to want to do that," Hidalgo said. "What I can say is this, I follow the law."

Investigators said text messages and emails between senior staffers show they communicated with Pereyra in January 2021 and allowed Pereyra to review and revise the project's scope of work nearly a month before a bid for proposals was publicly available to all on Feb. 19, 2021.

Elevate Strategies was awarded a nearly $11 million COVID outreach contract with the county in June 2021, but it was canceled three months later.

"I would love to be able to get into specific facts. A lot of what was released this past Friday was out of context. It was private messages, private emails, presenting a single side of what took place and there's a reason why you're not supposed to do that," Hidalgo said. "That is information that is supposed to be confidential until there's an opportunity for both sides to come out."

When 13 Investigates' Ted Oberg pressed Hidalgo to comment and make sure both sides are presented, the judge said, "I'd love to do that. I'd love to go allegation by allegation, but if there is an ongoing investigation, which obviously has been made clear to the press there is, I simply cannot answer those specific facts."

No charges have been filed as part of this investigation.

Even though the contract was canceled in September 2021, Elevate was still paid $1.4 million.

Harris County Precinct 4 Commissioner Jack Cagle, who was the sole commissioner who voted against the Elevate contract in 2021, said during Tuesday's commissioner's meeting that all the taxpayer funds paid to Elevate should be paid back to the county.

The county said Elevate will keep about $200,000 that it incurred through "legitimate expenses to which they would be entitled to by law."

"I would encourage you to go after every penny that was paid," Cagle said.

Hidalgo said the outreach contract given to Elevate was part of an initiative to reach out to communities "that were falling behind" to build confidence in the COVID vaccine.

Hidalgo said right now, nothing she's seen warrants letting go of any of the senior staffers at the center of the search warrants.

"I will keep looking and digging and trying to get a grasp on everything that took place and everything else that comes out. But right now, I don't believe (letting anyone go) is warranted," Hidalgo said. "I believe that the decisions my team made (were) based on fighting against COVID-19. I believe, from where I'm standing, that that was the intention behind the decisions made in my office. But, you know, we'll continue looking at the facts."

As part of their investigation, officials seized phones, laptops, and desktops for Aaron Dunn, then a senior advisor for public safety and emergency management at the county; Wallis Nader, who is Hidalgo's deputy policy director, and Alex Triantaphyllis, who is now Hidalgo's current chief of staff but was her deputy chief of staff in 2021.

Hidalgo said, irrespective of the investigation, as part of a recent review of the county's purchasing procedures, "No office will have staff members on selection committees going forward."

When 13 Investigates asked Hidalgo if she was surprised to see that text from her staffer, she referred the question to her attorney.

Hidalgo's attorneys have called the release of the search warrants a "misleading storyline (that) is the latest act of political theater from a politically motivated investigation."

Although Hidalgo, who is up for reelection in November, said she didn't want to comment on what the Harris County District Attorney's motivation may have been, she did acknowledge that it is a political season.

"I may be relatively new to politics, but I know politics when I see politics," Hidalgo said. "I may be young, and I understand some of this is coming from that, but I am battle-tested, and I am not deterred."

Harris County DA Kim Ogg on Tuesday said an investigation into the allegations of misuse of public information is not because of politics.