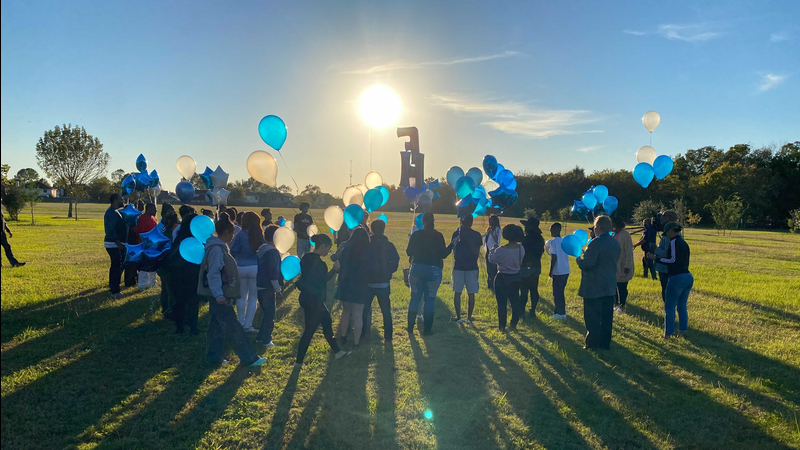 Dozens of family and friends met at a park to honor Fred Harris, 19, including his younger brother.

"Today, is very surreal," Debra Pruitt, Harris' grandmother said. "It's emotional, because we shouldn't have to be at this point at all. Fred deserved better than this."

Investigators said Harris and Michael Ownby, 25, were inside a holding cell at the Harris County Jail on Oct. 31 when Ownby attacked him.

According to court records, Ownby smashed Harris' head on the concrete floor, kicked him and stabbed him with a sharpened eating utensil.

Randall Kallinen, Harris' family attorney, said he has requested the video evidence of the brutal attack.

"I have heard that even seasoned investigators are disgusted and appalled by how viciously and savagely he was attacked and killed," he said.

Kallinen believes the 98-pound Harris should have been placed in a cell alone or certainly not with someone more than twice his size and with a history of violence.

Harris was booked on Oct. 11 for aggravated assault with a deadly weapon after an alleged incident that happened at a group home, according to Pruitt.

Prior to his October arrest, Harris had no known criminal history.

"Fred endured pain," Pruitt said, "And I pray that God removed this spirit before he had to endure the whole beating. It was sad. If you were able to see Fred, you could not believe another human being could do that to an innocent kid."

"And do you blame guards?" Kallinen asked, "If there's only one or two guards with a bunch of inmates? No. You need more guards in order to keep the inmates safe and the other guards safe. There have been 6,000 inmate-on-inmate violence episodes in the last year and 1,000 inmate-on-guard episodes, and this is caused by understaffing (at the Harris County Jail)."

Ownby has since been charged with murder in connection with the incident.

"We want people to know that this family is hurting and that we want to see change within the system," Pruitt said. "Not just for Fred, but for those that are there and those that are yet to come."

Harris' family has also previously said the jail is partly to blame for Harris' death due to staff shortages.

Harris County Sheriff Ed Gonzalez issued a statement on Nov. 4 about the incident.

"I am deeply grieved by the murder of Fred Harris at the hands of another person held in our jail. His family has my sincere sympathy and commitment that we will work with prosecutors to hold his killer accountable. While Mr. Harris' death is the subject of multiple ongoing independent investigations, every indication at this point is that staffing levels in the jail played no role in this crime. It is true that our teammates working in the jail need more resources. I will continue working with Commissioners Court to address working conditions in a jail that remains seriously overcrowded."