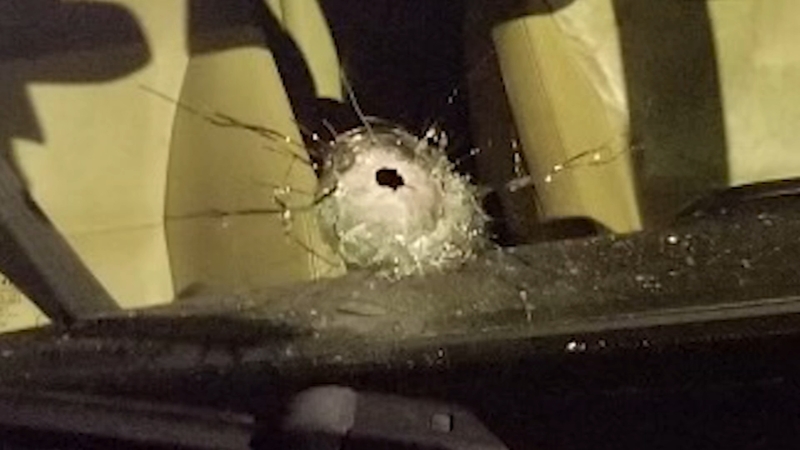 HOUSTON, Texas (KTRK) -- A Fort Bend County teen is lucky to be alive after someone opened fire on him while driving on the Fort Bend Toll Road.

On Friday, a driver's dashcam video captured a black Dodge Challenger race into the picture. After speeding by, the vehicle weaved around traffic and raced off the Fort Bend Toll Road.

What happened moments before might explain the erratic behavior.

"I mean, the fact that somebody could shoot at a 19-year-old kid, who really didn't do anything to them, at all, with no hesitation whatsoever, going for the kill shot is just absolutely ridiculous," Marshall Ervin said.

On Friday at about 5:30 p.m., Ervin was driving on the Fort Bend Toll Road and he recalled the black Dodge Challenger speed by. Seconds later, he saw a gun.

"I didn't really realize what was going on until I felt glass from my windshield hit my face, and I felt something fly by my head," Ervin said.

Houston police are investigating what happened but so far, no arrests have been made. Officers said they're looking for a 2008 through 2012 Dodge Challenger.

After having a bullet come so close to him, the 19-year-old said a responding officer told him, "He said, 'You should go and buy a lottery ticket.'"

This summer, HPD launched an initiative to combat road rage. Officers said to prevent it, avoid eye contact, don't respond to aggression with aggression and it's OK to be tolerant and forgiving.

Ervin said he isn't sure what provoked the shooter.

The Fort Bend County Toll Road Authority declined to release an image of the suspect's vehicle, citing an active investigation, but Ervin is thankful a neighbor captured the car.

As a result of this incident, Ervin said he is getting a dashcam for Christmas.

"It'll help find a person if that did occur again," Ervin said. "If I get hit by somebody, it videos it, and it's not my word on somebody else's word."

In this case, Ervin has bullet holes to prove the shooting. He hopes the casings, and the video of the suspect will help lead to an arrest.