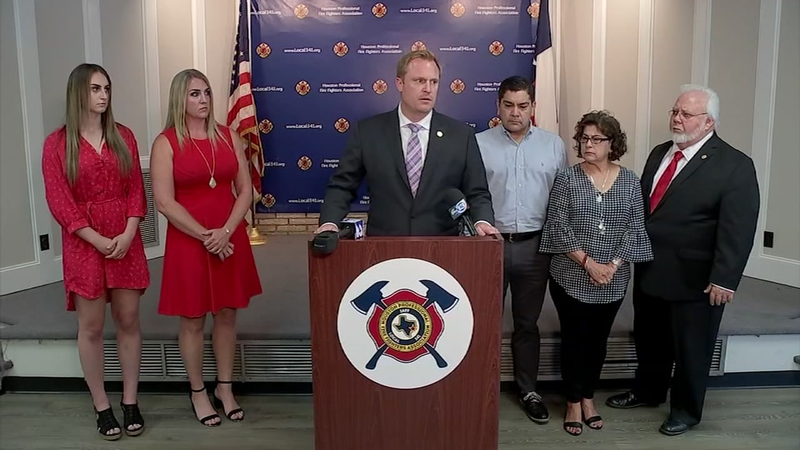 HOUSTON, Texas (KTRK) -- The message from families of fallen firefighters: 'leave us alone.'

Five firefighters were killed in the Southwest Inn fire in May 2013.

That legal action was between the families of firefighters and Motorola, not the city of Houston. The city wasn't a party to the suit nor did it help the firefighters win the lawsuit, but now the city wants to keep the lawyers who were involved in the fight from collecting their fees. The city is using taxpayer money to pay an outside lawyer to keep the fight going.

The fight is based in state law that allows the city to get worker's compensation death benefits back from families who win settlements in other lawsuits. The city has the option to try to get the money back or not.

Mayor Sylvester Turner has said repeatedly and as recently as Wednesday that he is not trying to collect anything from the families.

But they are seeking something. Court filings show the city will only give up its fight if the attorney for the firefighters, former Turner political foe Ben Hall, agrees to not get paid.

Whether Hall collects his fee is inconsequential to taxpayers, it doesn't cost the city anything either way.

"Please just let us move on with our lives so we don't have to keep reliving this," said "Iron Bill" Dowling's widow Jackie Dowling.

"Just leave us alone. How about that?" said David Renaud. "How about let us, let us be. Let our attorney be and let us just move on from this?"

A Turner spokesperson pushed back.

"Any claim that the City is 'still pursuing families in court' is untrue. The City never pursued the families. Now the city is no longer seeking money from the businesses."

In the city's full filed response in court Aug. 20, it says it wouldn't go after families, but could recover from the attorneys.

"The City exercises its discretion in the best interest of the City and the Public, and hereby forever waives and relinquishes its right to recover from the settling defendants in the Litigation the total of the Benefits paid by the City to or on behalf of the Waiver Beneficiaries, provided, however, that this Waiver in no way limits, waives, relinquishes or restricts any right the City has to recover from the attorneys for the Waiver Beneficiaries any settlement funds withheld from the Waiver Beneficiaries by their attorneys because of contingency fee liens, attorney's fees, or litigation costs incurred in connection with any litigation, including, without limitation, the Litigation, in violation of Texas law."