What Texans should know when filing claims for burst pipes 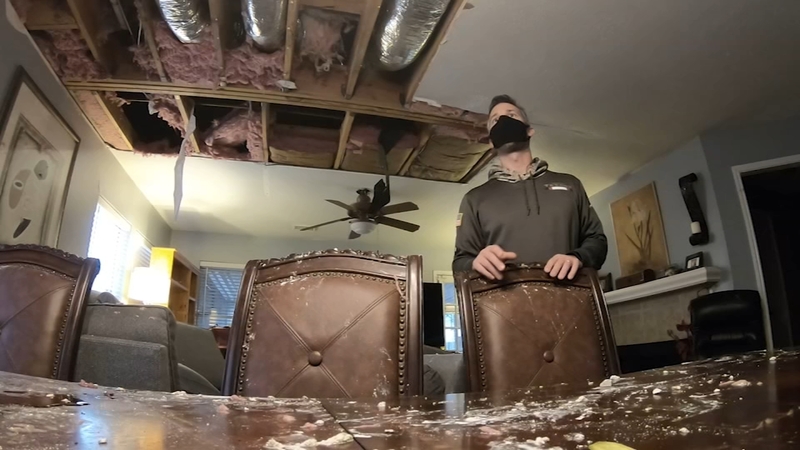 If your pipes burst, here's what to do next

HOUSTON, Texas (KTRK) -- This week's historic winter storm has had lingering effects on Texans across the state. For those with damage to their homes caused by burst pipes, what is the next step?

Community Impact Newspaper spoke with Camille Garcia, director of communications and public relations for the Insurance Council of Texas, on what residents should be doing and what questions they should be asking their insurance companies.

The conversation has been edited for length and clarity.

What should homeowners do to start the claims process for burst pipe repairs?

It is recommended that they first shut the water off to their entire home and call a plumber. I know that is going to be a feat all into itself because we've already heard from some plumbers that they're already booked into March. That's going to mean a lot of patience and a lot of perseverance to get some repairs done.

Start documenting. We ask policyholders to start taking photos, videos. Keep the pipe. Look at some other damages throughout your house. You're going to start pulling parts off bedding and such but document everything so that you can have a really good conversation with your agent or your adjuster. So that's going to be key to having that process expedited.

When you file a claim, you need to have that conversation as far as what it is that my specific policy covers. The good news is that most Texas homeowners' policies do cover burst pipes inside your home. However, to what degree? We have hundreds of insurance companies doing business here in Texas. So you have to understand what your policy is going to cover-do you have coverage limits, what's your deductible, etc.-and start looking at getting all of that information so you as a homeowner, as a policyholder, can start making really good decisions for your circumstances.

What should renters do?

In a renter's policy, if all they had was food spoilage, and they had $200 worth of food in their refrigerator, and they have a $500 deductible, it's probably not going to be worth the time to actually file that claim. There are few policies out there that do not have a deductible for food spoilage, but that's why it's so important to have that conversation with your agent or insurance company, to really know if there is coverage for this, and if I have a deductible under these circumstances.

What can consumers expect looking forward?

We're used to these regional events where there is hail in Georgetown, or there are the Dallas tornadoes that hit. But this has impacted every single Texan to one degree or another. So from home, auto, renters and business policies, we are projecting into the hundreds of thousands of claims. That is going to strain all sorts of resources. We're already hearing from our member insurance companies that they are bringing in folks from out of state to handle the influx of claims because this is going to be a really huge event.

What a consumer can also expect is that there is going to be a lot more virtual claims handling. The use of Google Duo or Zoom or FaceTime is going to be really important. That way the claims can be expedited faster but also balances safety because of the pandemic. Consumers will be seeing a lot more virtual technology used in order to handle not only the initial claim filing, but also the claim adjustment. It's not to say 100% of the claims will be handled that way, but the vast majority will be headed in that direction.

How does the insurance claim activity compare to previous disaster events?

It does exceed what we've had from some of our costliest storms, including [Hurricane] Harvey. It goes back to how it was a regional event and it was coastal. It came in 200 miles, but it was a rain event. In some cases, flood, in others, wind. A lot of autos were damaged. But again it was very regional. So compared to a singular Harvey, or a singular Dallas tornado, we are looking to project many more claim numbers.

The cost has yet to be calculated because at this point it is so wide in nature, and the scope is so enormous. For the next week or two, we're going to be seeing some flood claims coming through.

Should consumers be on the lookout for anything?

Fraud. Fraud is very prevalent in Texas after any major catastrophe. What we see after is fraud, meaning contractors, licensed and unlicensed, coming in from out of state and even some from in the state, and they prey on vulnerable folks.

As a homeowner, you see your house in the condition that it is in, and you are making an emotional decision. This person is knocking on my door and promises me that I'm going to get the world. We see so many of those instances where policyholders say, 'Hey, I signed over to this contractor and I haven't seen him, but he cashed my check.' And there's no way to protect the policyholder from that.
Report a correction or typo
Related topics:
weatherhoustonsnow emergencyicewinter stormwaterrentssurviving winterwinter weathersurviving wintersevere weatherrenters
Copyright © 2021 KTRK-TV. All Rights Reserved.
TOP STORIES
Who's starting? Who's throwing 1st pitch? Astros Game 6 guide is here
Peter Scolari, 'Bosom Buddies' and 'Newhart' star, dies at 66
Supreme Court justice says she would've blocked TX abortion law by now
Don't get stuck in these traffic closures this weekend
Brandon Lee's family speaks out after fatal shooting on movie set
Houston entrepreneur's family asking public to help find his killer
JJ Watt on Texans: 'It hurts me to see where' fan base is now
Show More
Video shows 3 women kidnap baby from north Texas motel
ACLU sues Magnolia ISD over male students' hair length policy
Warm and humid Friday, rain chances going up for the weekend
Baldwin: 'My heart is broken' after accidental film set shooting
Prop guns: What they are and how they can kill
More TOP STORIES News