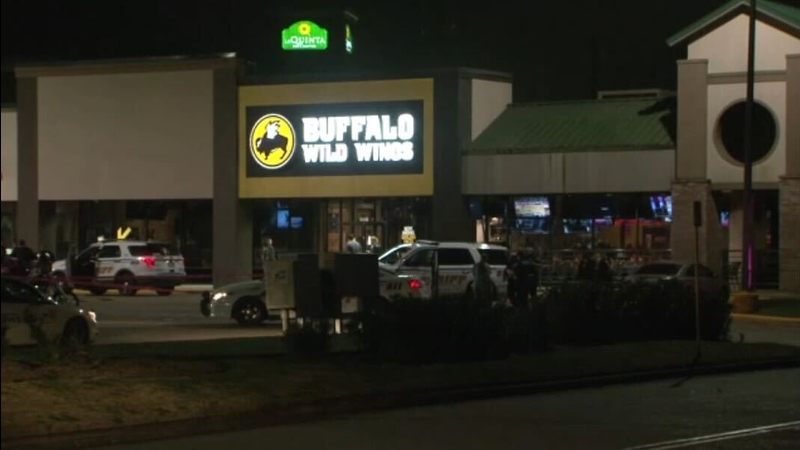 HOUSTON,Texas (KTRK) -- The Harris County Sheriff's Office is looking for the suspect in a deadly shooting that killed one man and injured another outside the Buffalo Wild Wings in the Atascocita Shopping Plaza in Humble. Investigators said a feud involving motorcycle clubs may have led up to the incident.

Sgt. Ben Beall with HCSO said they received the call around 12:20 a.m. at the restaurant located at 6840 FM 1960. They said two men were leaving Buffalo Wild Wings and standing next to their motorcycles, when someone in a gray Dodge pickup truck driving by opened fire on them.

"From reviewing the (surveillance) video we have so far, there doesn't appear to be any contact," said Sgt. Beall. "Once it (the pickup truck) turned northbound on Town Center, there was probably at least six shots fired from what witnesses are telling us."

The shooting killed one man, 43, who investigators said was a member of a motorcycle club. The second victim, 26, is in critical condition and undergoing surgery at the hospital. Authorities said he may have affiliation to a motorcycle club as well.

As Buffalo Wild Wings closes at 2 a.m. on the weekends, Sgt. Beall said the restaurant was still busy at the time of the shooting and the stray bullets hit three additional cars that were parked in the parking lot.

"It's a bit scary, because we live around the area too and we want to stay alerted especially because we work at night," said Juan Gracia, who works nearby. "It's a nice area. You don't really hear this around here a lot, because it's not something that we see here everyday. We just thought it was something fight-related or gambling-related."

HCSO said this incident could be related to on-going activity between a couple of the motorcycle clubs. They said there is a gathering taking place in Montgomery County this weekend, but they are not sure it there's any connection.