Suspect on the run after 1 dead, 13 injured in drive-by shooting at vigil in Baytown, deputies say 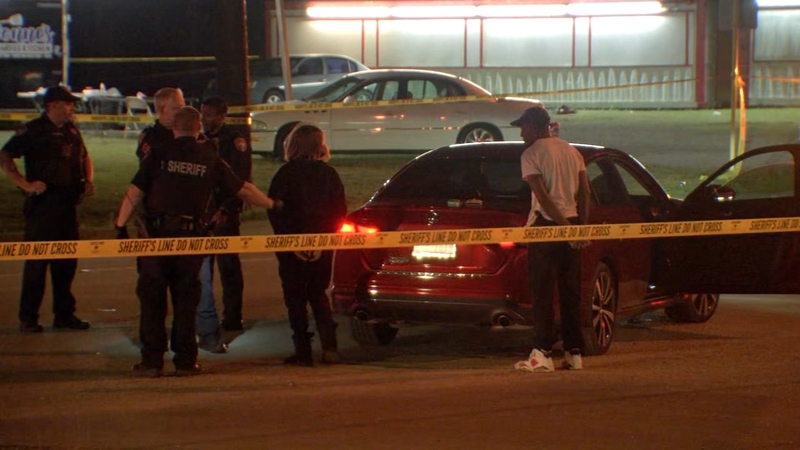 BAYTOWN, Texas (KTRK) -- One person was killed in a shooting that injured at least 13 other people Sunday evening at a candlelight vigil in Baytown, according to Harris County Sheriff Ed Gonzalez.

It happened at about 6:40 p.m. in the 1400 block of North Market Loop where Sgt. Greg Campbell said a mother was holding a vigil for her son, known as Lil' Daddy, who was killed at his home a couple of weeks ago.

Gonzalez said about 50 people, adults and children, were in attendance.

"While they were having their celebration of life and releasing balloons in the air, an unknown suspect drove down this road and shot rounds into that group of people," said Campbell.

In total, 14 people were shot. One woman, identified by deputies as Disha Allen, was pronounced dead at the hospital.

Update to last night’s shooting on N. Market Loop: a total of fourteen individuals were shot/injured after a suspect(s) opened fire at an outdoor vigil for a recent murder victim. One of those individuals, Disha Allen (mid 20s), was pronounced deceased at the hospital. The other pic.twitter.com/uZIWdUNRvz

Three people were taken to the hospital by Life Flight, and the rest transported themselves to Houston Methodist Baytown Hospital to be treated for non-life-threatening injuries, according to Campbell.

ABC13 spoke with a witness at the vigil and said he heard about 20 to 30 gunshots.

"People were screaming and running to their cars," said Sidney Williams, the witness.

Once everyone started arriving at the hospital, another incident occurred.

The victims all drove themselves to a hospital, where authorities say a large fight ensued. Late Sunday night, there was a huge presence outside Houston Methodist Baytown Hospital.

"When everyone got to the hospital, a large fight ensued and we had to contact other agencies to help with that large fight," said Campbell.

Some of the victims were later transported to Memorial Hermann for the treatment of more serious gunshot wound injuries.

Initially, authorities said eight people had been shot, but Gonzalez held a briefing later that night and gave an updated number.

Initially, authorities said one person was killed and eight others had been injured in the shooting, but Sheriff Ed Gonzalez held a briefing in which an updated number and information was released.

"Bullets don't have eyes, so it puts everyone at risk," said Gonzalez.

Witnesses told ABC13 two of the victims shot were the pastor and his wife who were in attendance at the vigil.

Authorities did not release the ages or identities of the rest of the victims, and did not say if any of them are children.

No arrests have been made. The sheriff's office said the suspect or suspects in the case are believed to have been driving a small, dark-colored sedan.