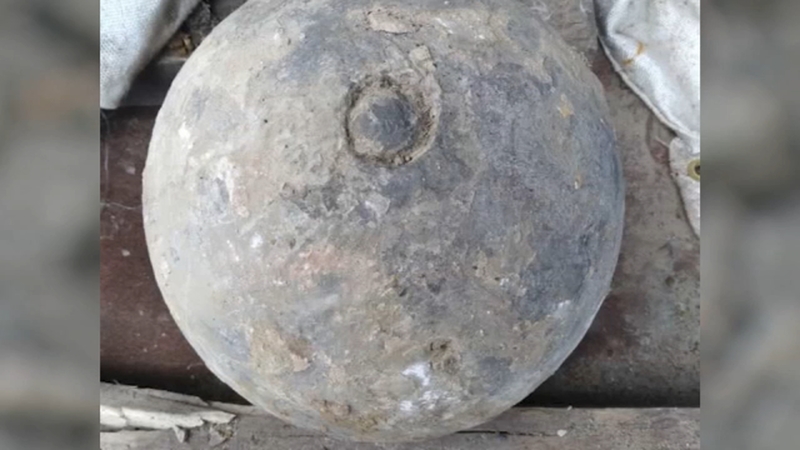 What's next for that cannonball that was found in downtown?

HOUSTON, Texas (KTRK) -- A day after an 80-pound cannonball was found by construction workers, there is now a renewed interest in the history of downtown Houston.

"To my knowledge, this is the first cannonball the county has ever found," said Rich Elwood, the director of engineering for Harris County Facilities. He's been working on the construction project for several years.

"A major steam line was damaged during Hurricane Harvey," explained Elwood, assuring a lot of planning went into the dig, but cannonballs were not on the drawing board. "CenterPoint lines, AT&T lines, drainage, storm sewage, all that had been identified. So something like a cannonball just got lost in the mix."

University of Houston Downtown History Professor Gene Pruess said he is not that surprised by the cannonball finding, considering how much commerce took place in the area during the 1800s.

It's an interesting discovery, but could more things like this be laying around in other parts of Houston?

Pruess said lots of Civil War munitions were hastily buried after the war ended to keep it out of the hands of Confederate soldiers coming through Houston from Galveston.

City leaders at the time also closed bars and restaurants because they were worried the wary soldiers would cause mayhem in the city.

Among local history buffs, it is fairly well known that the Confederate Army dumped a number of Civil War artifacts, including smaller cannonballs, into Buffalo Bayou near the Milam Street Bridge.

"They dumped them because the Confederacy thought the Union was coming," said Alison Bell, the executive director of the Houston Heritage Society. "So, they wanted to quickly hide the munitions, so they literally dumped them into the water."

That trove of Civil War relics were dug up during the 1960s, turned over to the Museum of Natural Science, which passed it on to the Heritage Society in the 1980s.

Bell showed off a few of the pieces to media on Friday, adding they would certainly make a space for the latest cannonball if the Harris County Sheriff's Department does not blow it up.

"I don't know if I can pick it up, but yeah, it would be kind of a cool sight-seeing thing," said Bell.

For now, the cannonball remains at the gun range of the sheriff's department. They're treating it like a bomb.

Requests to view the cannonball were rebuffed with the sheriff's department saying they were bringing in experts to evaluate it first to make sure it would not blow up on anyone accidentally. Back at the construction site, work on the steam pipe is also on pause.

Elwood said a ground penetrating radar is being brought in next week to scan the area. They want to make sure there are no other surprises.

Everyone has a right to be cautious, Pruess said. He points to the story of two Houston brothers who stumbled upon some Civil War artifacts in the late 1800s.

The brothers were killed when the munitions blew up. For decades, their bodies were buried in a crypt in downtown Houston.