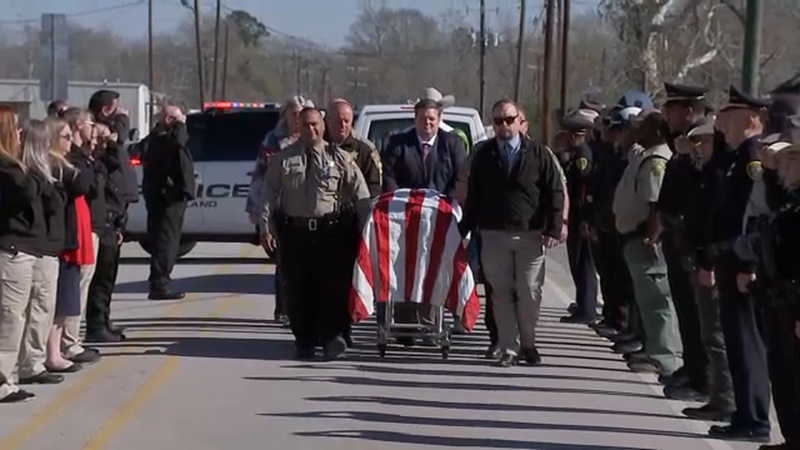 CLEVELAND, Texas (KTRK) -- A deputy constable shot and killed at a mall in Sharpstown last week is being remembered not just in Houston, but across the nation.

The procession for San Jacinto Precinct 1 Deputy Constable Neil Adams began at 8 a.m. His body was escorted from the medical examiner's office to Cleveland, Texas, where final preparations will take place for his funeral later this week.

Adams, 62, was shot to death last Wednesday while working an off-duty security job at PlazAmericas.

According to Houston Police Chief Troy Finner, a suspect identified as 35-year-old Czyz Harrison managed to wrestle away the deputy's gun, then shot and killed him. Investigators say Harrison was shot and killed by two HPD officers.

WATCH PROCESSION: San Jacinto Precinct 1 Deputy Constable Neil Adams was finishing up his last shift working an extra job at PlazAmericas the day he was killed, telling his wife it was too dangerous

San Jacinto County Sheriff Greg Capers told ABC13 Adams told his wife that the security job was too dangerous. The day Adams died was supposed to be his last day working that job.

Many people were heartbroken to hear of the deputy's death, including a Florida student.

"We are really hoping this run can keep his memory alive, and we hope our organization and many others, it can honor him well in a final goodbye for him," Cartledge said.

A viewing for Adams will be held Wednesday at the Coldspring Shelter at 225 Live Oak. Family will be there from 4-5 p.m. while the public is invited to attend between 5 and 8 p.m.

Adam's funeral, with full honors, will be Thursday at 10:30 a.m. His burial will be at Montague Cemetery on FM 1725 between Shell Oil Field Road and Meekins Road. Adams will be honored with the playing of Taps and a 21-gun salute.

San Jacinto Pct. 1 Deputy Constable Neil Adams was just a few hours from finishing his last shift at PlazAmericas Mall when he was shot and killed.

When asked what could've caused the situation to escalate, Wendall Harrison told ABC13, "That is not him and I don't know what happened. I have to see the video, but I know my brother's character."

A grieving community in San Jacinto County remembered Deputy Constable Neil Adams, who was killed while working an extra job in Sharpstown.

The suspect managed to wrestle the deputy's gun away and shoot him with it, investigators said. He was later shot by two HPD officers and died at a hospital.