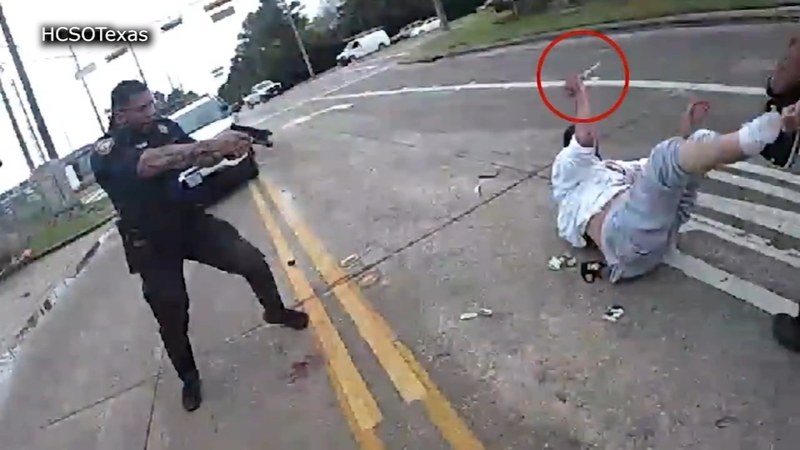 CYPRESS, Texas (KTRK) -- Nearly two months after a deputy and cadet trainee were involved in the deadly shooting of a man armed with a knife, the Harris County Sheriff's Office offered a new first-hand look of the confrontation through body camera and eyewitness video.

The incident happened outside of a convenience store in the 12900 block of Telge Road in the Cypress area on March 17.

The new footage shows the moment when the first-responding deputy and a trainee arrived to find the armed man, who was later identified as 35-year-old Matthew Hurlock.

The deputies found Hurlock with blood on his shirt yelling outside the business.

The video shows one of the deputies asks Hurlock to come toward them. After he refuses, Hurlock then tries to walk away from the deputies, resulting in a short foot chase and Tasers being deployed on him.

In the middle of the struggle, a third deputy arrives and tries to hold down Hurlock, who then gets a hold of a knife, which was something the sheriff's office highlighted in a 12-minute video compiling the footage in the investigation.

As the deputies back off from Hurlock, the suspect then points the knife at them. That's when one of the deputies opens fire.

Hurlock died from the shooting.

ORIGINAL STORY: Man with knife shot and killed by deputies in Cypress

The Harris County sheriff said a deputy and a cadet trainee struggled with the suspect before a Taser was deployed followed by shots.

HCSO Assistant Chief Mike Lee explained the video released Tuesday is offering a better understanding of the incident based on the information they currently have. The investigation remains in the early stages.

In the immediate aftermath of the confrontation, Sheriff Ed Gonzalez explained the process his department is going through to investigate the incident.

"A full and thorough investigation is underway. Per standard protocol, each Deputy-Involved shooting is investigated by multiple parties including the DA's office, the Harris Co Institute of Forensic Sciences, and our agency. Our condolences go out to the deceased male's family. We are aware of personal video footage of the scene. Also, our deputies wore Body-Worn cameras. All will be reviewed thoroughly. These situations are dynamic & split second decisions are made. As a situation unfolds, deputies do not have the benefit of pausing & rewinding footage. These incidents are extremely difficult for all involved. I'm relieved our deputies are safe."

Eyewitness News reached out to Hurlock's family after the video was released, but they declined to comment.