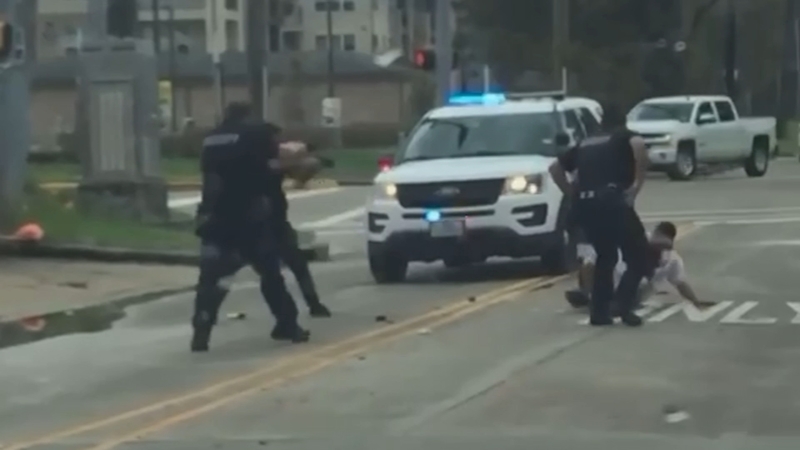 Man with knife shot and killed by deputies in Cypress

CYPRESS, Texas (KTRK) -- A knife-wielding man was fatally shot by two deputies at a Cypress convenience store, according to the Harris County Sheriff's Office.

It happened in the 12900 block of Telge Road late Wednesday morning.

Sheriff Ed Gonzalez said preliminary information showed a deputy and a cadet trainee, who is experienced but new to the department, were called to the store about a man with a knife who was acting erratic.

The Harris County sheriff said a deputy and a cadet trainee struggled with a suspect wielding a knife before a Taser was deployed followed by the shots.

The suspect had blood visible on his body when the deputies arrived, though, the sheriff did not have information on where the blood came from. According to the sheriff, the two deputies tried to calm the man, but the incident escalated to the point they each used a Taser but to no effect.

It was at that point the first two deputies had their firearms drawn, opening fire as the suspect produced a knife, the sheriff said. CPR was performed on the man before he was transported to a hospital, where the suspect was pronounced dead. No deputies were injured.

Eyewitness News obtained a video recorded by Anson Johnson, an eyewitness to the shooting.

"[You] see a gentleman run by and the cops were running behind him, then they Tased him," explained Johnson. "He fell into the street. Pretty much the rest of it you see from the footage I had caught."

The video shows deputies struggling with the man in the road before four shots were fired.

"I feel like from what I've seen, and what I went back and watched on the video I took, he was trying to get away, he was, you know, fleeing," said Johnson.

At the scene, Gonzalez also addressed the training his deputies receive, saying, "We spend a great deal amount of time and training and resources to make sure that all our deputies are properly trained in responding to individuals in crisis or mental illness."

WARNING: The video contains moments that may be disturbing for some to watch. Deputies struggled to get control of a man Wednesday they said was wielding a knife in front of a NW Harris Co. convenience store.

The sheriff later elaborated on the next steps of the investigation, stating the following on his Twitter feed:

"A full and thorough investigation is underway. Per standard protocol, each Deputy-Involved shooting is investigated by multiple parties including the DAs office, the Harris Co Institute of Forensic Sciences, and our agency. Our condolences go out to the deceased male's family. We are aware of personal video footage of the scene. Also, our deputies wore Body-Worn cameras. All will be reviewed thoroughly. These situations are dynamic & split second decisions are made. As a situation unfolds, deputies do not have the benefit of pausing & rewinding footage. These incidents are extremely difficult for all involved. I'm relieved are deputies are safe."

A full and thorough investigation is underway. Per standard protocol, each Deputy-Involved shooting is investigated by multiple parties including the DAs office, the Harris Co Institute of Forensic Sciences, and our agency. Our condolences go out to the deceased male’s family. https://t.co/A116yIKcZh