Future of oil could ride on Houston's US House races 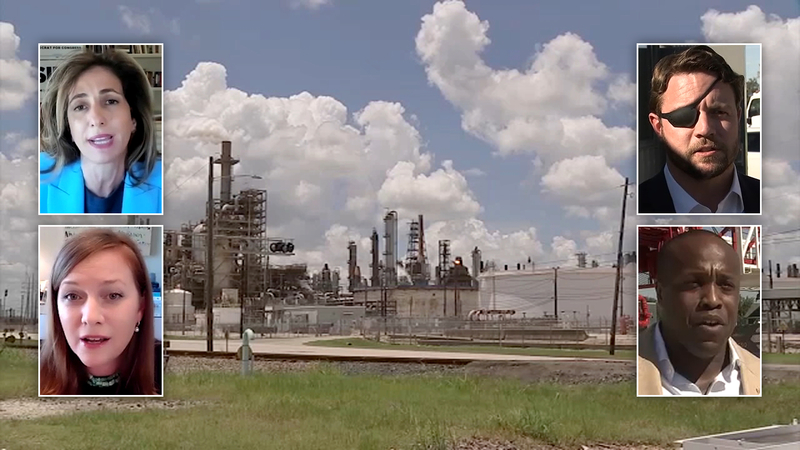 HOUSTON, Texas (KTRK) -- Days before the election, the oil industry has come front and center in a couple tightly contested congressional races in the Houston area.

On Friday, Republican candidates U.S. Rep. Dan Crenshaw and Wesley Hunt rallied with a couple hundred oil industry workers at Lime Instruments in west Houston. The candidates have focused on the oil industry after former Vice President Joe Biden announced in the second presidential debate he plans to phase the oil industry out.

"I know right now it's tough, but I'm telling everyone, please, let's stick together," said Hunt, who is campaigning for the U.S House District 7 seat. "Let's work through this together. Let's innovate together, and we'll get through it."

"I passed a bill about research and development for carbon capture in the natural gas base called the 'LEADING Act,'" Crenshaw explained. "I developed a bill called the 'New Energy Frontier.' I actually speak in specifics and legislation. These people never do."

Both Crenshaw and Hunt talked about innovation and the progress oil companies have made toward renewable energies. Their opponents also highlight those points as well.

"I really believe we have to use natural gas as a transition," Ladjevardian said. "We have to be careful, and make sure there are regulations on fracking, and consider all options on the table."

University of Houston energy fellow Ed Hirs said it could take a couple years for the oil industry to rebound from the pandemic.

"From small to large, the companies have been laying off workers," Hirs explained. "Part of it is the pandemic. The other is the structural issues."

Knowing this, we asked congressional candidates, who serve two-year terms, what each would do during the next couple years to help the oil industry.

"Keeping the regulatory side up," Crenshaw said. "Building more pipelines, not less. Making it easier to build the infrastructure. These are some simple things that would be helpful."

"There will be a big push for an infrastructure package, and I think that will be very helpful. But I think the key to get through this challenge is being a good partner by listening to folks in the industry and learning the ways," Fletcher said.

"So, the number one thing for us is to get people back to work safely," Hunt answered. "Rebuild our economy safely, and once that happens, this is when the innovation curve comes back."

SEE ALSO: Could Texas be a swing state in the 2020 presidential election?
EMBED More News Videos

Will Texas jump on the Biden bus or continue riding the Trump train like in 2016? Experts from both parties weigh in.