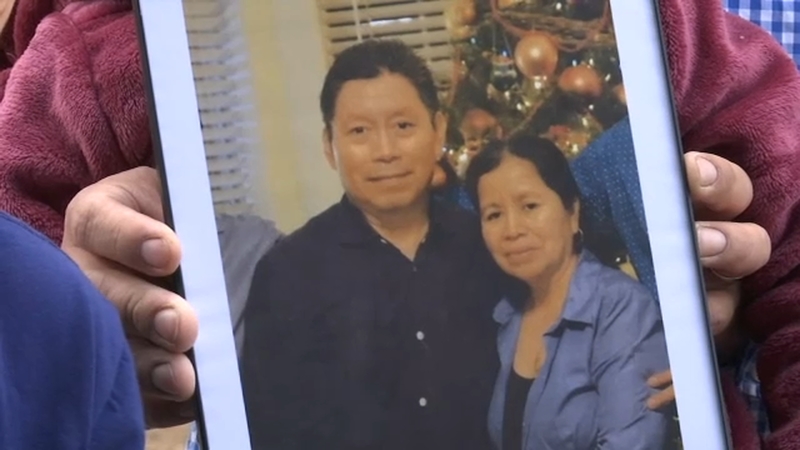 HOUSTON, Texas (KTRK) -- A Houston family is mourning the loss of their parents killed in a hit-and-run accident on Christmas Eve.

Juan and Marta Sapon were broadsided by a pickup truck while trying to drive onto South Gessner.

Juan and Marta were married for 38 years and were born and raised in Guatemala before starting a life in Houston.

The couple were on their way to Christmas Eve service Friday evening. Police say they were at a stop sign on Neff attempting to turn onto South Gessner when a speeding pickup truck broadsided their car killing them at the scene.

Police say the driver, identified as 20-year-old Alessio Bevinetto, failed to stop and render aid. Witnesses told police after the accident the driver got out of his truck, appeared injured and disoriented, and then ran from the scene.

Santos says it was at that time that family was driving to the couple's house to celebrate Christmas. He says some family members drove by the scene and saw the accident, but didn't realize at the time that Juan and Marta were the victims.

"We waited for them at the house. They weren't showing up. So we called them on their cell phone. They weren't answering," said Santos. "It's something that we still can't understand how it happened, or maybe we don't want to believe it. But it's something we're trying to cope with."

The couple's grandchildren are holding on to their grandparents' pictures and memories.

Bevinetto appeared in probable cause court Sunday. According to court records, he's charged with two counts of second-degree felony failure to stop and render aid with an accident involving death.

Authorities say Bevinetto is a citizen of El Salvador.

HPD officials arrested Bevinetto late Friday night at his apartment, according to police. It was there Bevinetto reportedly admitted to police he caused the crash.

Police say Bevinetto left the scene of the crash and didn't stop to help the couple.

Santos says if Bevinetto had called 911 or stopped for help, that could have possibly saved his parents' lives. He says he is thankful for the people who did stop after the accident.

"The people who were there for her in her last moments trying to help her."

"There's a large community who loved them," Santos said. "He took them away from us. We want justice to be brought. He needs to pay for what he did."

The family says Juan Sapon would have celebrated his 61st birthday Sunday.