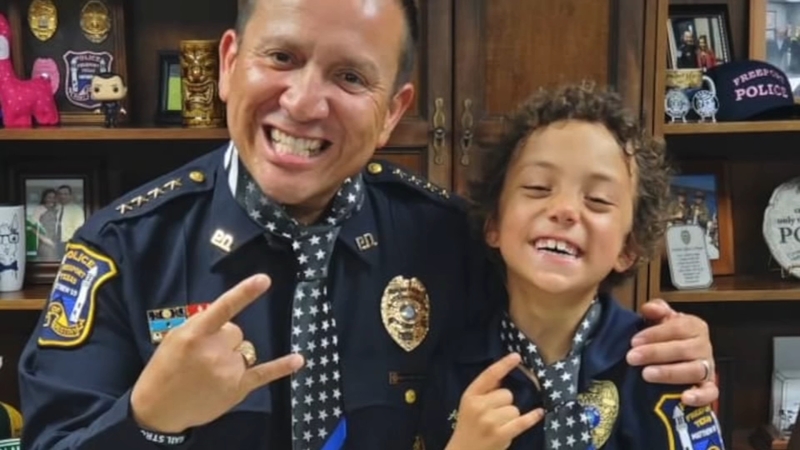 FREEPORT, TX (KTRK) -- She may only be seven years old, but Abigail Arias knows her way around at the Freeport Police Department.

Abigail, who has an incurable form of cancer, captured hearts earlier this year when her dream came true. She was sworn in as an honorary Freeport Police Officer.

"In my 27 years, this day will be the best day ever in my career," said Freeport Police Chief Ray Garivey, who fought back tears as he swore Abigail in back in February.

Since that special day, Abigail has been embraced by her new family in blue. Her new best friend is Chief Garivey.

"He loves me so much," said Abigail. "I love him too. He lets me do my dream come true of being a police officer."

"He's her guardian angel," said Abigail's dad, Ruben Arias. "I truly believe that. I believe that God sent him for her."

It was February 2017 when Abigail was first diagnosed with stage 4 Wilms' tumor, a rare kidney cancer in children. She began treatment at Texas Children's Hospital, where she went through 90 rounds of chemotherapy, in addition to eight consecutive days of radiation and surgery to remove the tumor.

"We went for a final evaluation and she was cancer free," said Ruben Arias. "She made it."

But in April 2018, a quarterly scan revealed that Abigail's cancer had returned.

"It had metastasized in her lungs," said Ruben Arias. "Which followed with another 90 plus rounds of chemo. Just to be told, there's nothing else we can do."

"We started hearing about other kids in our community that were battling different types of cancers," said Ruben Arias. "We just knew that it was our mission to reach out and help where we can. We know the costs of treatment. We know what it's like to get that sting of that bill."

Officer 758's Cancer Fight plans to hold a kick-off fundraising event at 11:30 a.m. on Sunday, July 21 at Brazoria County Fairgrounds. The event will include a kids' zone with bounce houses, a washer tournament, live and silent auctions, fried fish plates and live music.

Officer 758's Cancer Fight is also raising money through t-shirts sold by a company called Relentless Defender. The t-shirt design was inspired by Abigail herself.