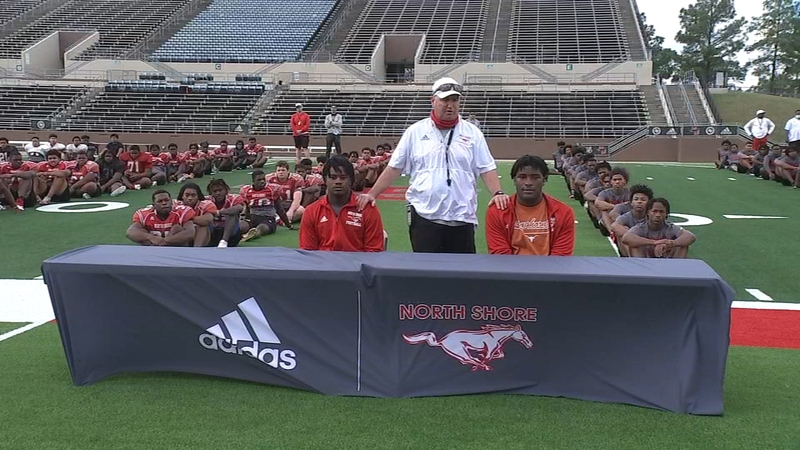 HOUSTON, Texas (KTRK) -- After North Shore High School standouts Jacoby Brass and Kris Ross signed their names on college scholarships Wednesday, they told ABC13 this day is not only about them.

"My mom raised me since I was young," Ross, a Texas Longhorns signee, admitted. "She was a single mother for a while, so she was doing everything she had to do."

"I'm one of the first in my family to do something like this," said Brass, who signed with Houston Baptist. "I like to put on for my momma. She did so much for me, so I know this scholarship takes a lot of stress off her."

But it's not just family on hand as Brass and Ross took part in National Signing Day. Their North Shore teammates are flanking them on the field.

"Those two will be the first two tell you: any success they've had is a direct result of their teammates," explained North Shore head football coach Jon Kay. "We'll have more kids sign in February. It's always great to put the program on display."

The program will be on display this weekend - on the state's biggest stage. Immediately after the signing day ceremony, North Shore conducted a practice. Why? Because on Saturday the Mustangs play for a state championship.

"That's a lot coming in one week," Ross revealed. "It feels good, though. It's a great feeling that everybody doesn't get to have and I'm fortunate enough to have."

As Kris said ... it's a lot. And it's also finals week at North Shore. So to take some pressure off himself, Denver Harris - the fourth highest-rated recruit in Texas according to ESPN - chose not to sign on Wednesday.

"There's a lot on my plate and stuff," Harris admitted. "All of my injuries and stuff, you know? The state championship coming up and signing day, too. It's a lot of stuff, so I wanted to wait."

Harris said he'll announce his college choice: Texas A&M, Texas, LSU, or Alabama after Saturday's state title game. Because this week at North Shore, in addition to scholarships being inked, there's a focus on other signage: hanging another state championship sign on the wall of the Mustangs' football facility.